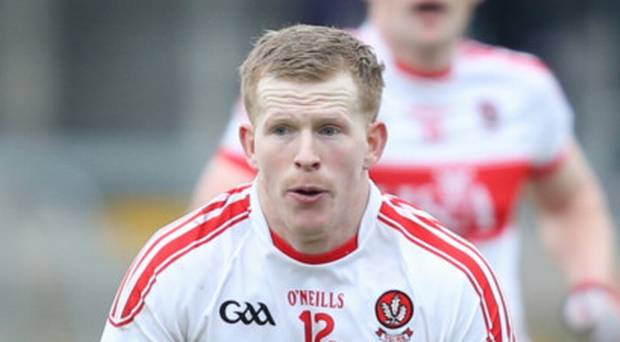 Derry have maintained their perfect campaign with a seventh straight win after they edged out Wexford in what was the game of the league so far.

At one stage the Oak Leaf county led by nine-points and almost ended up losing the game in injury time. As the old cliché goes though, they saved the best until last in what can only be described as an absolute thriller, a game that saw seven goals and thirty seven points in total over the course of seventy minutes.

For the opening ten minutes the teams wereneck and neck with scores coming from Ryan Bell and Enda Lynn for Derry and Wexford’s Daithi Waters and Jonathan Bealin had it at 0-2 all.

The opening goal of the game came from Benny Heron and that was quickly followed by delightful scores from Ryan Bell and Benny Heron, but the three pointers didn’t stop there as Enda Lynn got in for Derry’s second goal of the game and that was followed by a swift response by Wexford’s Ben Brosnan who buried the ball into the back of the net, then three minutes later Ryan Dougan got in for Derry’s third goal. For the remainder of the half both sides went point for point as the Oakleaf county took a 1-08 to 3-11 lead with them at the short whistle.

The second half was a great contest with both sides playing attacking football and going score for score, Kevin O’ Grady got Wexford’s second goal from the penalty spot.

From then on the sides went point for point  until the final seven minutes, first when Barry O’ Connor got in for Wexfords third goal and a minute later Ben Brosnan had the ball in the back of the net and margin was down to just a single point.  Christopher Bradley eased the Derry nerves with a solid point to go two ahead, as the game entered injury time it was still in the melting pot and Daithi Waters had a great chance to win the game for Wexford when he was put through on goal but his effort went wide.

Jonathan Bealin’s point reduced the deficit down to one again but with the last attack of play Derry went up the field which saw Conor Doherty point to ensure that it would be the Oakleaf men emerge as two-point winners.

Graham set to be ratified as Cavan Football Manager