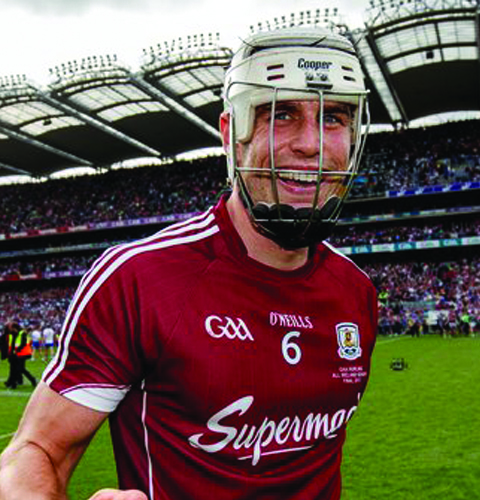 The Sunday Game All-Ireland night selection committee can be a bit of a mixed bag at times. I haven’t agreed with all of their decisions over the years (who has?) but in some instances at least, they can reach a consensus. Such was the case on the first Sunday of September this year, when 7 pundits were asked to name their hurler of the year, and every single one of them plumped for Galway’s Gearoid McInerney. It was a ringing endorsement for the young Oranmore Maree centre back

Imagine the surprise then last week when the GAA announced the nominees for Hurler of the Year and McInerney’s name was nowhere to be seen. Instead there were 2 Waterford men and only one from the All-Ireland winners. Jamie Barron was there, as you would expect. Kevin Moran had an excellent year and was also a good shout for the prize. But when choosing a Galway nominee, the selection committee chose Joe Canning?

Now don’t get me wrong, I love Joe Canning. He gave one of the finest individual performances I ever saw in a game in the 2008 qualifier against Cork in Thurles. He’s provided some of the most skilful moments we’ve ever seen in Croke Park, such as his amazing goal in the Leinster final of 2015, and that match winning point in the All-Ireland semi-final this year. He’s without doubt one of the most skilful men to ever pick up a hurl in this country. But I don’t even know if his own family members would argue he was the most influential player on the Galway team this year.

Personally, if I had the choice of choosing a hurler of the year from the 3 candidates (not that that would ever happen) I would nominate Jamie Barron. The Fourmilewater man was excellent throughout the season, but particularly in the crunch moments against Kilkenny and Cork in the championship he really turned the game for his side with those crucial goals.

But politically at least, you could see why Barron wouldn’t be chosen. Galway were clearly the best team over the course of the summer, and would feel that one of their men deserved to be chosen as the leading player. And of course, if Barron did win the award, that would make 4 Deise men from the last 20 years (Tony Browne, Dan Shanahan and Austin Gleeson being the others) who would have won the top award. Would that not be a little over generous for a county that has never claimed the Liam McCarthy Cup during that time?

And again, that’s not to dismiss what Joe did this year. He was excellent against Dublin in the first round of the Championship. He had a fine All-Ireland final. And, of course, there was that last 20 minute spell in the Tipperary game where everything he hit went over the bar. But if he is to get a nomination for hurler of the year then I’m sure Conor Whelan, David Burke and Gearoid McInerney must be wondering where their nomination is too.

In particular, McInerney’s introduction was the final piece of the jigsaw in the Galway side this year. We’ve all known what Joe Canning has been capable of producing ever since he came onto the senior inter-county scene in 2008. But what Galway have really been missing, ever since the late great Tony Keady hung up his inter-county boots has been a commanding presence at centre back. Who could forget his demolition job on Padraig Maher in the semi-final? He was also tasked with muting the influence of last year’s hurler of the year in the All-Ireland final and succeeded in keeping him scoreless.

So for a team changing influence over the course of the year, McInerney would get my vote. Then again, Joe Canning’s name is more renowned across the country. He’s an ambassador for the game in a way that only Henry Shefflin and a few other players have been. But it still grates somewhat that he’s been put up for the award more so on reputation than his influence over the last 9 months.

It seems as if this award is being given as much for longevity as it is for impact. For instance, Ryan Giggs was named PFA footballer of the year in 2009 by his fellow pros, when it was patently obvious he was nowhere near the best player. But having gone through a glittering career without such an honour being bestowed on him, there was a campaign to give him some sort of belated credit. Similarly, despite being one of the best hurlers of the last 15 years, Canning has never scooped the top individual honour. So maybe there’s a bit of redressing of history in this decision. Galway haven’t won an All-Ireland senior hurling title in 29 years. Joe Canning has been the best Galway hurler in that time. Therefore, by that rationale, Canning deserves the award.

Then again, maybe something more sinister is at place here. From the moment Galway became fancied to win the All-Ireland Canning was an almost unbackable favourite for the hurler of the year gong. Is it too much of a conspiracy theory to wonder that someone within the halls of Croke Park had him backed to win?

For years, Canning was undoubtedly the most influential hurler on the Galway team. But, paradoxically at least, you could argue that the reason they won the All-Ireland this year, is that he no longer had that exclusive status. Rather than automatically looking for him every time they had the ball, this year the side knew they had 6, if not more, top class forwards to call on. They also had a fine midfield, and a rock solid defence. So, it wasn’t Joe Canning, or maybe even Gearoid McInerney who was the single most important person for Galway this year. The team was the star.

Now I’m sure an individual award isn’t the foremost thing in McInerney’s mind. Coming into this year, he wasn’t even sure of his place on the Galway side. He finished it with an All-Ireland medal in his back pocket and all the plaudits of the country ringing in his ears. So, he probably doesn’t care much that the top prize could be going to his more experienced colleague. But if Joe Canning walks up the steps to collect the top individual prize in the game at the All-Stars gala on November 3rd, from Jamie Barron to Kevin Moran and beyond, there’ll be more than a bit of head scratching going on.