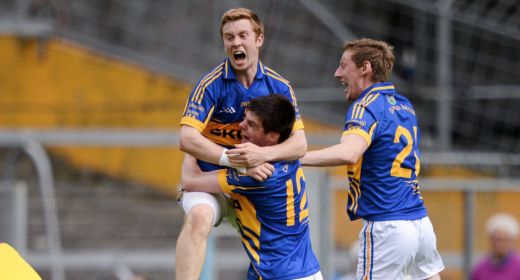 Conor Sweeney was the star as he scored 2-05 in Croke Park in this Division 3 Final. The most surprising thing of all was that he wasn’t awarded the TG4 man of the match award, even Michael Quinlivan who got the coveted award was surprised. It was pretty much even and after 25 minutes Louth were in front 0-07 to 0-04, with scores coming from Ryan Burns, Tommy Durnin and Eoin O’Connor were off the mark. However, Tipperary thundered into the game with 1-05 in the next five minutes. Sweeney, O’Halloran and Jack Kennedy kicked points, before Sweeney picked out Casey with an excellent fist pass and the midfielder finished superbly to the net. Quinlivan got his only score from play then just before the half time whistle to make the scores 1-11 to 0-09.

The second half was much of the same with both sides giving there all for the cause. Kennedy, O’Halloran and Quinlivan added three points in a row before Sweeney goaled on 47 minutes. Sweeney grabbed his second goal in injury time when Bevan Duffy turned over possession close to his goal, all that was left for Sweeney to do was to round the keeper and finish past a defender on the line, something that he dually did. Tipperary were full value for their win, but Louth and manager Colin Kelly will be delighted that his side got back to back promotions, a sign of progress.

The best players on the day for Tipperary were Conor Sweeney, Michael Quinlivan and Paddy Codd, while for Louth Tommy Durnin, Declan Byrne and Ryan Burns were best.

Player of the Match: Conor Sweeney, helped himself to 2-05 and was easily the best player on the pitch.