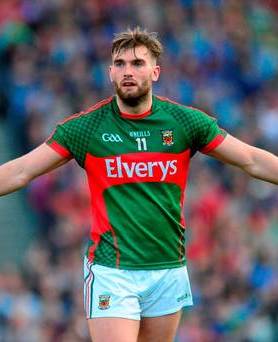 This weekend saw the football championship finally ignite, with two quality encounters between four of the best teams in the country. While the games may not have been as high scoring as we would like, the closeness of both made them excellent to watch.

Tyrone and Mayo really set a great tone for the evening with a hugely exciting match. As Ulster champions Tyrone would’ve been fancied here, particularly since they haven’t exactly set the world alight this season. They picked a good day to get back to some of their usual form though, and I’m sure they’re far happier to be in an All-Ireland semi than to be in Tyrone’s position as provincial champions but with their season over.

The game started slowly, with a very low scoring first quarter, but that doesn’t mean it lacked excitement, as I thought it was fairly open and end to end stuff. We saw some excellent defending at both ends, Colm Cavanagh with a standout tackle on Aidan O’ Shea. O’ Shea still looked very dangerous as an inside forward though, especially with Andy Moran alongside him, and with more direct ball going in they could’ve been even more effective. At the other end we had Peter Harte, one of Tyrone’s most effective players, who seemed a bit wasted as he was starved of possession up front. Both teams played with an extra defender, which would’ve contributed to the difficulty in getting scores, but it was neck and neck throughout the half, both sides getting some quality points. At half time, with the teams level at 7 all, it was still very difficult to pick a winner. Neither team could pull away by more than 2 points. Peter Harte and Sean Cavanagh were kept very quiet by their own standards in the first half, Mattie Donnelly was causing big problems for Mayo however, with 3 excellent points from play.

The second half started with a yellow card each for Lee Keegan and Sean Cavanagh, which unfortunately for him would come back to haunt him later on. As the half wore on there was plenty more drama on offer. Peter Harte got more and more into the game, and became more and more influential as the game progressed. Lee Keegan was doing a very good job of frustrating Cavanagh and keeping him relatively quiet. It wasn’t until the 48th minute that we finally saw a goal opportunity, well saved by Clarke, the Mayo goalie. In the 58th minute we had what was probably the biggest turning point, Sean Cavanagh’s second yellow card resulting in his sending off. With over 15 minutes still to play (including injury time) you’d imagine a player of his experience and ability could have done something to swing the tide in Tyrone’s favour. We’ll never know now though. Even with the extra man Mayo couldn’t put Tyrone away, and when Keegan put over a mighty left footer with 5 minutes left Mayo tried to play a bit of ‘keep ball’ to run down the clock. It almost backfired badly on them. Tyrone have been masters at this type of game in the past. A couple of mistakes, while not exactly unforced, gave Tyrone the chances they needed to not only equalise but go ahead. Fortunately for Mayo they didn’t take them and they ran out deserved winners by a point.

The game threw up a number of interesting talking points. For starters there seemed to be a lot of yellow cards, most of them deserved. The game was quite niggly at times, with frees for indisciplined tackling and carelessness. The one that people probably most remember is Sean Cavanagh’s just before the second half started. Did Lee Keegan start it or were they both equally to blame? Either way, it was that incident and Cavanagh’s careless high challenge on Aidan O’ Shea that caused him to see red. The niggly part of the game also highlighted something that’s been creeping in to football for a number of years now, which is playacting. A couple of times you could see Tyrone players godown holding their face when replays clearly showed no contact. They were certainly frees but this extra drama is completely unnecessary and shouldn’t be tolerated.

For the Mayo midfield the kickout situation was probably a frustrating one. I don’t remember a single Tyrone kickout going past their 45. Mayo won the vast majority of any that did so in fairness it was a good tactical decision by Tyrone.

Apart from all the yellows, the niggles, the careless tackling, the wides and missed chances, I found the game hugely entertaining and while the better team probably won on the day, Tyrone had the chances to draw and win and will certainly harbour a number of regrets. As for Mayo, despite a season where their form dipped from their usual standards and losing their provincial crown, they find themselves back in the semi-final and back on form, and will definitely go into the Tipperary match with sky high confidence.

The second match of the evening saw Dublin finally get the test they haven’t really had all season. The better team definitely won on this occasion, but they were certainly made to work for it. I was delighted to see Paddy Andrews get back into the team, he’s always worth a few scores and is very capable of creating chances from the tightest of angles. They’ll need him on top form. Again this was not a particularly high scoring game, but you couldn’t take your eyes off it. The ball was being moved so quickly by both sides and there was such pace in the game that it was another highly entertaining spectacle. Dublin flew out of the blocks and could’ve had a goal within 17 seconds, but the angle proved a little too tight for Diarmuid Connolly and his shot was well saved. He had an even better chance later in the half but sent it just wide. The kickouts from both sides were coming almost insantly and from early on it seemed like the team that can sustain this pace, or last the longest, will be victorious. It proved to be so in the end.

Despite Dublin creating two clear goal chances, it was a very tight first quarter, with the sides level after 19 minutes. But Dublin then started to assert their authority and pulled away into a 5 point lead by half time. This got extended to 7 at the start of the second half, with a mighty Michael Dara McAuley point, but an unfortunate mis-kick by Cian O’ Sullivan gave Donegal a rare opportunity which they converted into a goal in the 43rd minute. Dublin could’ve been in real trouble a few minutes later when Connolly was sent off for a second yellow card. From a Dublin supporters point of view there were some very nerve wracking moments, where Dublin seemed to be overdoing it with the handpassing and inviting Donegal on to them. Like Mayo they were playing with fire, but they responded the way good champions do, with composure and intelligence on the ball, and the players certainly didn’t show any of the nerves that supporters might have felt. They kept possession well, held their nerve and ran out 5 point winners thanks to a late Paul Mannion goal, which was a definite contender for goal of the season. For Dublin it will be very pleasing that they closed the game out with only 13 men, they’ve learned a lot since Donegal caught them in 2014.

As in the first game there was no shortage of controversy and drama here. The subject of certain players being targeted has once again surfaced, and with it Diarmuid Connolly’s name has also come up. He had a great game, and is obviously someone who requires special attention from opponents. Whether that attention comes within the rules or not is another story, but when it came to his sending off I think he can’t have too many complaints, even if the second yellow was simply careless tackling. At least he doesn’t get a suspension unlike Eoghan O’ Gara, which was a very harsh red card. By the letter of the law yes he did strike, but it was such a tame slap that in the spirit of the game a yellow could’ve sufficed. Compare it to Michael Murphy’s tackle on Brian Fenton, a closed fist to the jaw and nowhere near the ball. I’m not suggesting Murphy should’ve seen red, but in comparison a yellow should’ve done for O’ Gara.

Despite this, I think it was another very entertaining game, played with pace and energy, although looking back at it now Dublin were probably always in control, and were very deserving winners. They got the tough test they badly needed, and now get to focus on another clash with the old rivals Kerry. No doubt Kerry will present an even sterner test, and the winner of this one will undoubtedly go into the final as favourites for the Sam.

McCrystal to take over Tyrone Ladies