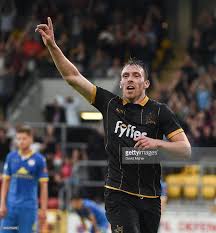 Ten years ago Aleksandr Hleb lined out for Arsenal in a Champions League final. A decade on his current team was knocked out by a superb Dundalk outfit in a rain-soaked Tallaght stadium.

In a nation that defines its football ethos by work rate, passion and putting opposition teams under pressure Dundalk showed that with a bit of belief the beautiful game can flourish on these shores. The League of Ireland champions were composed, clinical and brave throughout. Against their more illustrious opponents they comfortably retained possession throughout the game under pressure. In the driving rain they never panicked and managed to see out a famous victory for Irish football.

Bate by contrast were lethargic throughout and offered very little threat going forward. Stephen O’ Donnell, the Lily White’s captain, gave a commanding performance bossing the midfield exchanges. The game’s defining moment was the substitution of Paddy McEleney for the injured Ronan Finn. With his first touch the former Sunderland player pinged an audacious 50 yard pass to find his teammate out on the far wing. That was just a taster of what was to come from the inspired Derry man.

With David McMillan working hard up front all night Dundalk were able to be direct when required. McMillan’s pace and power was an issue for the Bate defence all night. The breakthrough came following a moment of magic from left winger Daryl Horgan. Picking up the ball on the left side of the Bate box he took on two defenders, dodging side to side he managed to eek out enough room for a cross. His precise ball dropped to the head of McMillan and he headed it off the post and in. The crowd erupted with Dundalk breaking the deadlock just on half time.

The second half resumed with both teams settling into the same pattern of play. Dundalk were assured in possession and bravely held onto the ball against increasing Bate pressure. McEleney was in inspired form and was finding space in behind the midfield and driving directly at the Bate defence. The second goal arrived after another lung bursting run that had defenders backing off. He dinked a ball to the back post that evaded everyone. The ball was drilled back and again McMillan produced a superb headed finish. Tallaght stadium was pandemonium. The dream was becoming reality.

Bate had sent on their talisman Hleb in the second half to try to salvage an away goal. Unfortunately for the former Barcelona star Dundalk were not in the mood for relinquishing their lead. The defended brilliantly when required and controlled the game right up to the last-minute.

What a famous night. Dundalk the League of Ireland champions had knocked out Champions League regulars Bate Borisov. The same Bate side that were incredibly close to progressing through to the knockout stages in last years competition. Dundalk’s European fairytale is not over yet!

“Malt vinegar baths while watching a DVD after every training session”...