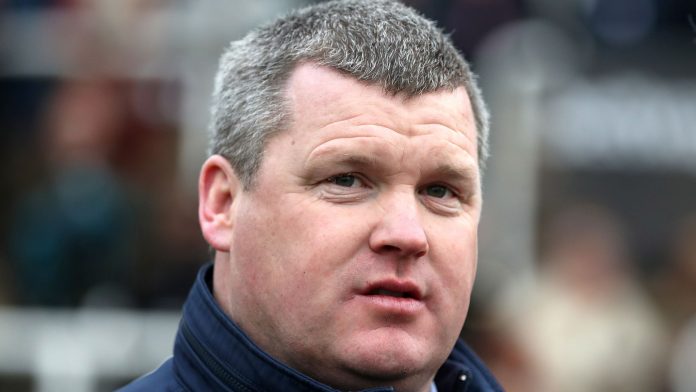 Trainer Gordon Elliott is pleased with the form of his horses ahead of the Cheltenham Festival, and in particular Galvin, who is his big Gold Cup hope.
Davy Russell rode the eight year old at Leopardstown on Monday. He will be challenging last year’s runner up A Plus Tard for the favourite tag having beaten his rvial in the Savills Chase at Christmas.
Speaking about Galvin, Elliott said: “Davy was very happy with Galvin. He said he quickened twice. Conflated was a little bit keen with Jack (Kennedy), but he said he felt very good and that should just leave them spot on.
“Galvin is showing more pace this year, he looks great. It’s not going to be easy, but I’m happy with where he is.”
On the subject of other horses for the festival Elligott said: “We haven’t made a call on Conflated yet (Ryanair or Gold Cup), I’ll have a chat with Michael and Eddie (O’Leary, owners) and see what we do but he worked nicely there.
“Queens Brook galloped well, Jamie (Codd) was very happy with Ginto and he was thrilled with American Mike.
“He worked with Fury Road and while he might not look like a machine, he’s one of the best work horses we have in the yard so he was very happy.
“Jack and Puppy (Robbie Power) were thrilled with the two horses that will run in the Champion Hurdle (Zanahiyr and Teahupoo). They’ve got a big task but they were very happy, both of them.”