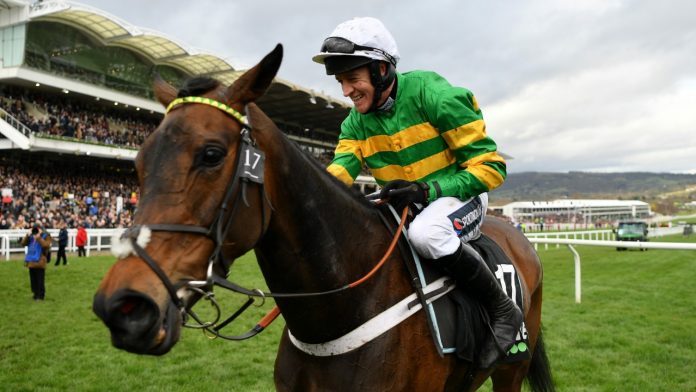 Epatante could run in Punchestown in the Paddy Power Champion Hurdle rather than Aintree, that’s according to trainer Nicky Henderson.
No decision has been made on whether Constitution Hill will join her after his success in the Sky Bet Supreme Novices’ Hurdle at Cheltenham.
Speaking about Epatante Henderson said: “She’s had a good year. She’s won a Fighting Fifth and a Christmas Hurdle and now second in the Champion Hurdle. Only Honeysuckle could beat her. She will almost certainly come over [to Punchestown]. We have discussed Aintree but it’s two and a half and she doesn’t want two and a half. She’s all about speed.”
Constitution Hill is unbeaten under Rules. Racing people would love to see Constitution Hill and Honeysuckle clash. It’ll be up to owner Michael Buckley to make that decision, according to Henderson. He said: “I’m afraid Michael seems to have taken up the mantle. I’ve just been reading the reports! I honestly don’t know what we’ll do. We haven’t discussed it. I know he’s very keen to take on Honeysuckle. I should think it’s quite likely he will get an entry in the Champion Hurdle as it keeps the options open. Michael is a great sportsman and nothing will scare him off, that’s for sure. So we shall see. He’s inexperienced but he’s very straightforward. He’s the same as Honeysuckle like that isn’t he? She’s a push-button machine.
“There’s nothing obvious for Marie’s Rock in Aintree so I’d say she’ll go somewhere in Punchestown too. What Jonbon does will probably depend on what Constitution Hill does. Walking On Air may go to Punchestown after missing Cheltenham. He’s pretty smart and has come back really well.”

Conflated to run in Ryanair Chase, not the Gold Cup