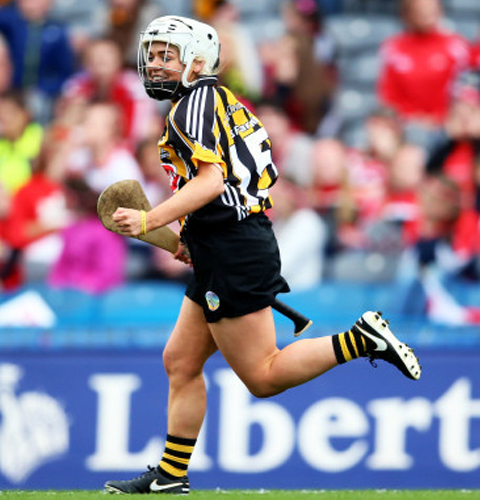 Kilkenny’s march to a third consecutive league title may largely have been down to their sublime opening ten minutes but credit to Kilkenny captain Shelly Farrell who led by example and took some whacks along the way especially once the game was in the melting pot at the height of the Cork comeback.

Denise Gaule’s opening statement from a long range free seem to set the tone for what was a superb Kilkenny blitz in the opening ten minutes. Kilkenny were nine points up before Orla Cotter registered Cork’s opening score, something that Paudie Murray’s side will be livid with on the bus back to Cork.

Gaule was captilising on some fantastic work from the Kilkenny middle eight , indeed you could say Cork were losing out not only on the 50/50 tussles but the 60/40 ones also with the exception of Cork’s leading light Ashling Thompson who was a competitor throughout.

Katie Power delivered a monster on five minutes that had the Cats purring and the fantastic Power had her fingerprints on a number of Kilkenny’s early scores firstly connecting with Jenny Clifford before assisting a beauty by Miriam Walsh.

Cork were stuck in neutural with the Kilkenny back line nullifying the treat of Amy O’Connor, while Walsh, Power and Guale were on fire up top.
As the half went on Cork grew more into it and Orla Cronin pointed from out the field on twenty six minutes to leave the scoreboard looking slightly healthier for the reigning All Ireland champs at 12 points to 4.

Linda Collins got the final score of the half cutting the lead down to seven, however Paudie Murray’s side had more questions than answers during the half time break. Ann Downey’s side weren’t tipped by any of our pundits before the game and were handling the pressure we suggested they wouldn’t earlier in the week just nicely.

Cork got off to the perfect start in the second period with Orla Cronin finding the net with multiple Kilkenny players in hot pursuit. This is maybe where you would have thought Cork would kick on but credit to Kilkenny for holding their composure as they responded with two neat points first from Miriam Walsh and then on 40 minutes Aoife Doyle got Kilkenny’s 14th point to leave the scoreboard reading 0:14 to 1:05.

It’s natural to critique Ashling Thompson a little more than others due to the high profile she commands but the Cork star deserves all the plaudits she gets as she never stopped and belted a cracker from 60 yards to breath life into her Cork side.

Player of the game Denise Guale kept the Kilkenny scoreboard ticking but Cork produced a comeback worthy of reigning All Ireland champions with a quickfire double from substitute Katriona Mackey.  Kilkenny’s lead was down to just a single goal and Cork had a huge chance to equalise when Orla Cronin went in search of her second goal. Cronin was unlucky to part with her stick and then blasted wide after resorting to the boot, advantage was been played however and Orla Cotter knocked over to setup an interesting finish.

Captain fantastic Shelly Farrell then stepped up taking some heavy knocks none more so than on the 52nd minute when Cork net-minder Aoife Murray up ended Farrell saving a most certain goal. Murray received her marching orders but what more could she do than take the chance Guale would miss it. Guale’s only blot on her copybook work was that her penalty was saved by that lady again Aishling Thompson after a powerful strike.

The scoreboard remained 0:15 to 1:09 before Linda Collins and Orla Cotter left the minimum between them with time raging red.

Kilkenny held out to win 0:15 to 1:11 and record a third league title in a row, revenge for last years All Ireland defeat and silence a few doubters (Sportstalk included)

Overall both teams will know they have plenty to work on and to be fair both teams looked like they are still in the middle of their fitness regimes so early days yet. What is exciting about this saga is both will feel they can improve alot from the game and both will fancy themselves if they meet later in the year. The happier obviously of the two teams will be Kilkenny, on home soil in front of their people they capture a national title something maybe overlooked but a nice touch.

Cork will be back and will know they never turned up for the opening 10 minutes, a few of their stars misfired today and will be disappointing with that but on the upside they had a few substitutes that put their hands up making training over the next couple of months competitive.

Stay tuned to Sportstalk over the next few weeks as we ramp up our 2018 coverage of both Camogie and Ladies Football.