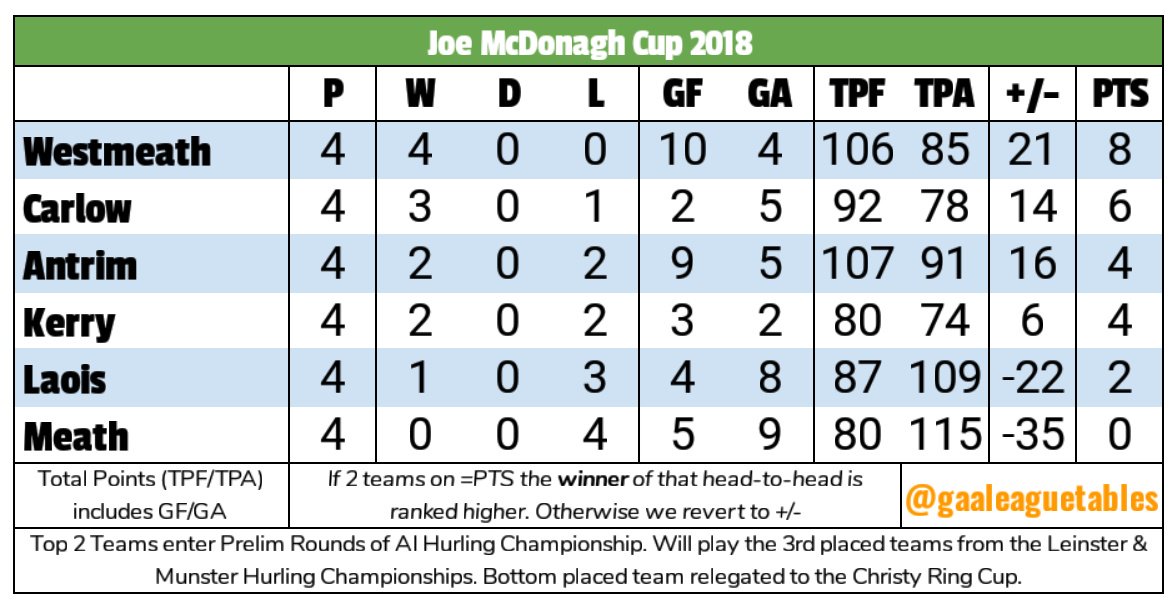 Ahead of this weekend’s final round of Joe McDonagh Cup fixtures, Westmeath are guaranteed a place in the final and will be joined by either Carlow or Antrim in the July 1 decider.

Westmeath have won all 4 games including last weekend’s crucial 2-19 to 1-20 win over Antrim in TEG Cusack Park and manager Michael Ryan can now prepare for the final with the return of Aonghus Clarke a key reason why his side have a 100% record.

Carlow have their faith in their own hands as a win or draw against Westmeath on Saturday will see them qualify to once again face the lake county. Colm Bonnar’s side earned an impressive 2-25 to 2-15 win away to Laois last weekend and with John Michael Nolan and Chris Nolan in good form are now in a great position to join Westmeath in the final.

Antrim will be hoping that Carlow can slip up, as if the Saffrons win at home to Kerry and Westmeath beat Carlow then it will be Dominic McKinley/Terence McNaughton’s team that travel to Croke Park, a stage made for the likes of Neil McManus.

Kerry can’t qualify for the final as even with a win they will lose out to Carlow on head-to-head.

Meath are still pointless but can relegate Laois by winning on Saturday. Meath have improved as the tournament’s gone on and were beaten by Kerry 0-18 to 0-16 last weekend. The best they can hope for is a relegation play-off.

Laois know that if they aren’t defeated in Navan then they can’t be relegated.  They could also avoid the relegation play-off if they finish on four points along with Antrim having already defeated them. However if they finish level with Kerry, Eamonn Kelly’s charges will lose out on the head-to-head record.

Winners And Losers For The Weekend’s Action – 11/12th March