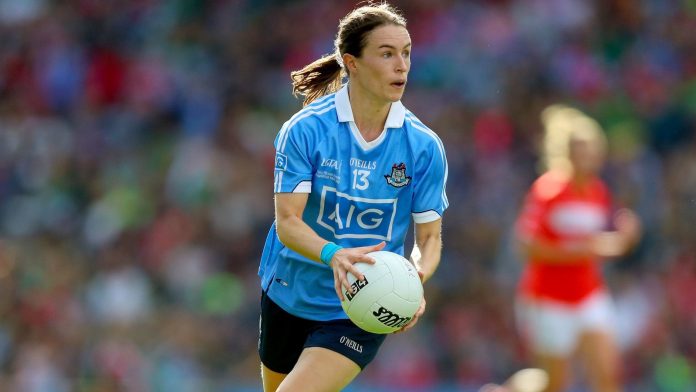 Dublin star Sinead Aherne scored 2-5 as St. Sylvester’s set up a currentaccount.ie All-Ireland Intermediate Club Final meeting with Castlebar Mitchels. The Malahide side defeated Fermanagh side Kinawley Brian Borus 4-11 to 2-5 in today’s semi-final.
Fermanagh star Joanne Doonan scored 1-3 for Kinawley but it wasn’t enough as the Dublin champions advanced to the final. Sylvester’s made a great start to the game and held a 3-7 to 1-3 lead going in at the break.
Substitute Katie O’Sullivan grabbed the Leinster champion’s fourth goal to extend their lead to 13 points. Kinawley never gave up the fight but Sylvester’s were just too strong.
In Saturday’s semi-final Castlebar Mitchels defeated Munster champions Castleisland Desmonds 3-7 to 2-7. Niamh Hughes scored 1-3 for the Mayo side. The final quarter of the game is where the game was won as the sides were level 0-6 apiece at the second water break.
The Connacht champions hit 3-1 in the space of four minutes. Julia Ann Twomey grabbed a goal for the Kerry side in the 60th minute and although they cut the gap to one point in stoppage time they were unable to grab an equaliser and Castlebar held on.

A goal from Lorraine O’Shea saw Tipperary champions Mullahone advance to the currentaccount.ie All-Ireland Junior Club Final with a 1-6 to 0-6 win over Galway side St. Brendan’s. The Munster side will play Leinster champions St. Jude’s in the decider.
O’Shea ended the game with 1-4 while Kilkenny camogie star Denise Gaule impressed for the Tipperary side. Gaule got the game’s opening score in the second minute. There were two points between the sides at the break with Mullahone ahead 1-3 to 0-4.
St Brendan’s lost Leann Walsh in the second half when she was sin binned. Try as they might they couldn’t get close to Mullahone as the Tipp said booked their place in the final.
Dublin’s St. Jude’s defeated Carrickmacross on Saturday afternoon 3-9 to 0-11. Aisling Gannon and Niamh Kerr scored late goals for the Dublin side. Jude’s led by a goal at the break 1-6 to 0-6 with Carrickmacross keer Kerrie Martin keeping her side in the game with a string of fine saves.
Carrickmacross were right in the game up until the end when they were dealt a blow, conceding two late goals and Jude’s were into the All-Ireland final

The Christmas Break…… Is there actually a break for players?

Sheridan selected as Wing Back on our Team of the Finals