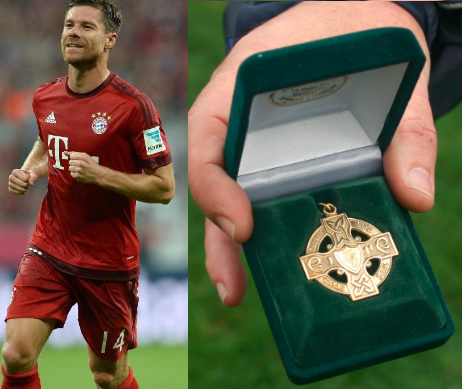 1. Drogheda United football crest derives from the Turkish Ottoman empire crest. It is believed that during the Irish Famine, Turkey’s then leader Sultan Abdul Majid sent three ships loaded with food to Drogheda port. As a sign of thanks, the Drogheda town adopted the ottoman empire star and crescent as its coat of arms crest. Other sources, however, contradict this claim, saying that the coat of arms dates back to 1210, during the reign of King John, whose symbol was the star and crescent apparently. 2. Xabi Alonso has an All Ireland football medal. At the age of 15, Alonso went to Kells, County Meath, on a school exchange programme to learn English. There, he helped the local Kells junior football team to win an All Ireland Junior club title in Keating Park, Chairsiveen. 3. Argentina’s retired legend Diego Maradona has his own religion made by his fans. The Iglesia Maradoniana was founded on October 30, 1998

The “Ten Commandments” of the Iglesia Maradoniana are: 4. Messi’s first contract was signed on a napkin! 5. Greek footballer, Giorgos Katidis, was handed a life ban from their national team. Scoring a goal in a game on March 13, 2013, Katidis celebrated by giving the crowd a Nazi Salute. Katidis later apologized, however the Greek Football Federation imposed a lifetime ban, barring him from participating in all Greek national teams. WHY DIDN’T STEPHEN CLUXTON GET AN ALL-STAR?