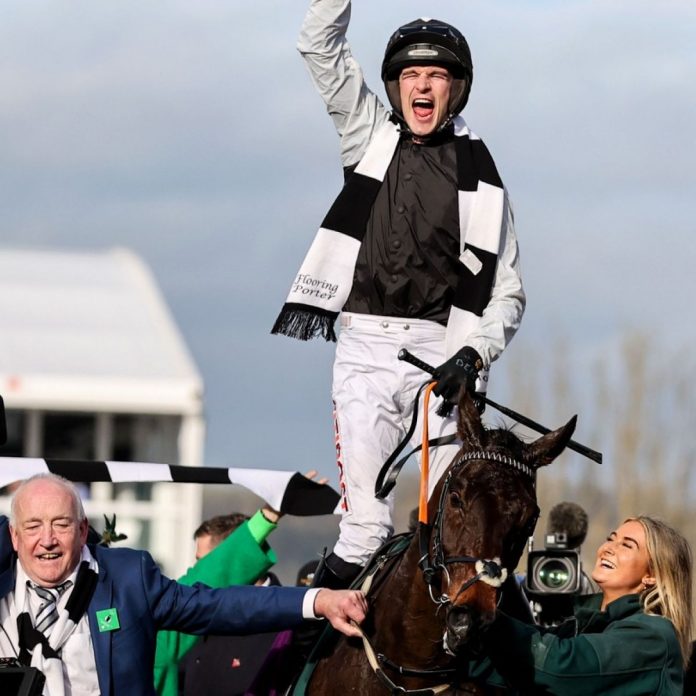 Flooring Porter is among 10 entries for the JRL Group Liverpool Hurdle at Aintree on Saturday. He produced a dominant performance to successfully defend his Dual Stayers’ Hurdle crown at last month’s Cheltenham Festival.
Gavin Cromwell recently raised the possibility of him lining up on Merseyside before a potential trip to France later in the year. His likely rivals on Grand National day include Stayers’ Hurdle runner-up Thyme Hill, who won last year’s Liverpool Hurdle for Philip Hobbs.
Champ, who won the Sefton Novices’ Hurdle and was only four lengths behind Flooring Porter when fourth just over three weeks ago, looks set to be entered. While Thomas Darby and Molly Ollys Wishes are also in the mix for the extended three-mile contest.
Alan King’s Edwardstone will bid for success in the Poundland Maghull Novices’ Chase.
The eight-year-old has won his last five races over fences. His biggest threat is Dan Skelton’s Third Time Lucki. Gentleman De Mee is a contender for Willie Mullins.
Nicky Henderson has given Supreme runner-up Jonbon the option of stepping up to two and a half miles for the first time, having also entered him for the two-mile Top Novices’ Hurdle on Thursday. Walking On Air is another possible for Henderson.
Ballymore runner-up Three Stripe Life, King’s North Lodge, Martin Pipe Conditional Jockeys’ Hurdle winner Banbridge and Skelton’s pair of Elle Est Bell and Lac De Constance also feature.

Honeysuckle to stay on for one final campaign