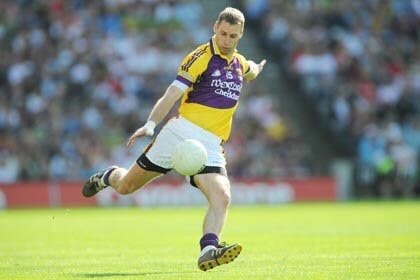 Mattie Forde is seen by many, as one of the finest footballers of his generation. Growing up in Ballyfad in North Wexford, the ace corner forward had a successful career with the Model County stretching back from his debut against Fermanagh in 1999, all the way to 2011. His ability to read the game and accuracy from play made him a household name throughout Ireland. Football was important to him from the start. He said: “I am from Ballyfad, it is in the very north of Wexford. The town is almost in Wicklow. Football was my first love. I am one of six in my family and we were all involved in sport. My older brother was also somebody I looked up to. I never imagined I would have played for Wexford. It wasn’t something I saw happening.”

Having influences in his area was something which helped Forde immerse himself in football. He loved playing the game but also educated himself on how to get to the next level. It was the Rebel County that first caught his eye. He revealed: “I remember watching the great Cork team. I believe the year was 1987. They were a great side. You always took inspiration from teams playing in All-Irelands and back then was no way different. From a player’s viewpoint, I looked up Maurice Fitzgerald and later Peter Canavan. I remember watching Maurice kick a sideline free off the ground on his left foot. I am still to see a player do that again to this day. I later came up against Peter Canavan. He was tough but fair. I always had great respect for him.” Forde could create space and kick off both feet. This was eventually rewarded with a call up to the Wexford squad in 1999. He said: “Oh God it was only like yesterday, your inter-county career can pass you by if you let it. I made my debut up in Enniskillen against Fermanagh. It was a surreal experience. That particular experience has stayed with me to this day.”

After he made his debut, Forde quickly established himself as the go-to player on the Wexford team. His career reached its pivotal moment when in 2008, he helped guide the team to a first All-Ireland semi-final appearance in 51 years. Casting his mind back, Forde feels fairly proud of the experience: “Of course. Gaelic football in Wexford was seen as the second class sport underneath hurling, so for us to have been beaten by Dublin in a Leinster Final and to have made it as far as we did was a huge deal. People in Wexford stood up and took notice of us. We beat Down and Armagh in the back door so we felt anything was possible.” The Model County were eventually beaten by Tyrone in the semi-final. Forde, however, does have some regrets about that game: “I had to go off injured at half-time. It was one of the lowlights of my career for sure. I had recovered from a niggling injury on my ankle a few weeks prior. It was very frustrating. Having to watch from the stands was hard. I remember running out in front of Conor Gormely and I just rolled the ankle.” The team at the time was managed by an unknown quantity in Jason Ryan. The Deise native came in under the radar after landing a club title in Wexford the previous year. Forde admits he didn’t know of him: “Jason Ryan, to be honest, we didn’t know who he was. He had played against us for Waterford before and to be fair to him he got us believing in ourselves. He was the catalyst behind the success of 2008”.

Having a love for many other teams including Kerry, Forde wishes he had the privilege of playing the Kingdom in a final. He said: “They had class all over the field. I had a great love for that Kerry team.”

Forde achieved many personal accolades in a stellar career. He was part of the 2004 All-Star team and in doing so became the first footballer from Wexford to receive the award. He was also part of many Railway Cup squads with Leinster and also played on the International Rules team for Ireland. Forde highlights his particular experiences with the All-Star team: “I was lucky enough to go away with the

team to play the 2003 team in early 2005. I loved meeting players from other counties. I was particularly close with the Kerry boys. Everybody thought they were so serious, but I can tell you the craic with them was brilliant. All the boys were great. Colm Cooper was great to be around. I think we just gelled well.” Apart from these experiences, Forde looks back on being captain of the county side as a huge milestone: “It is something you dream about. It’s everything to play for your club and then be given the honour to captain your county. It is things like that you never take for granted.”

Playing in the full-forward line at any level isn’t for everybody. Forde admitted to be successful there are a number of key ingredients: “I believe you have to have multiple things to be a good corner- forward. You have to be quick-thinking because at county level you only have a split second to make your decisions. And obviously being accurate was something I always strived to achieve. I suppose the answer is being an all-rounder if I am being honest”. Forde came up against many mean defences in his career. He played at a time where football was at its most competitive, with the likes of Wexford, Fermanagh and Armagh reaching the latter stages of the championship. His toughest opponent was from Ulster: “Sean Marty Lockhart of Derry. He was a tight marker and what made it worse was he was such a sound fella off the field. We had some right battles over the years”. During his career, Forde was a master at creating space. Although the game has changed Forde admitted that if he was playing, he hopes he’d adapt well: “Obviously now teams are more structured defensively and the ball is held onto longer. I suppose you still see the likes of David Clifford and Con O’ Callaghan shining, so I would like to think that my patience would help me get on the ball if I was still playing. In my view it’s still about scoring, so I would like to think I could still achieve from open play.”

Forde had self-belief and this was rewarded over the years. He was the player his team-mates would look for when games were there to be won. Moving into management is nothing something he’d like to do: “To be honest I helped out with the Wexford forwards for a few years. The dedication to being a coach is huge. It’s a 30 plus hours gig. I don’t think I would like to be an inter-county boss if I’m honest. It is very different to playing that is for sure.”

Having had a football in his hand for as long as he can remember, Forde was immersed in the game for so long. Having a close-knit dressing room and a goal to succeed helped him become the ace forward he was. He was also gifted with a hurley. He said: “I played hurling but had to stop in 2009, because I wasn’t able to juggle both. Most lads in Wexford would have given both a go. I have a Leinster Intermediate title which I am more than happy with.” There is no denying Forde was in awe of Kerry and their success. He is now retired for over 10 years and is happily married. He joked: “I am married to a Donegal woman actually, not a Kerry one.”