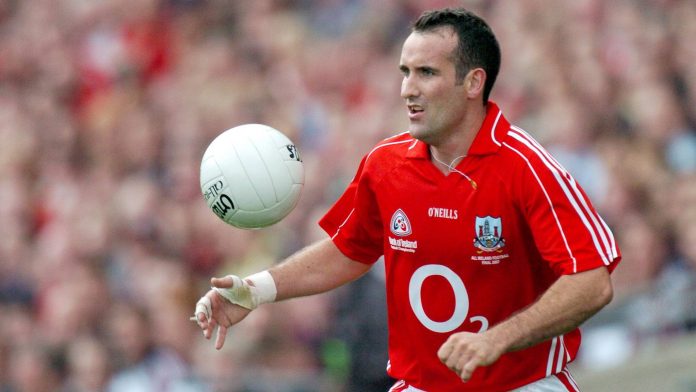 Tributes have been pouring in across the GAA county for the Cork All-Ireland winner Kieran O’ Connor who passed away on Wednesday evening at the age of 41 following a long illness with cancer.
A statement that was released from Aghada GAA and Friends of Kieran “It is with deepest of regret that we announce the passing of one our greatest clubmen and dearest of friends-Kieran O’ Connor. The courage, determination, spirit, and bravery of Kieran as a player was seen at its finest over the last 3 years as he battled his illness with dignity and respect. There are no words that will capture just what Kieran O’ Connor meant to Aghada GAA.

The Aghada native, key and noticeable figure of the Rebel’s panel in which he won the All-Ireland senior football title in 2010, O’ Connor was diagnosed with a rare form of bone cancer called Ewing’s Sarcoma, on three separate occasions since his retirement from football, having overcome it twice.

O’ Connor busted onto the scene as a starter for the Cork U21 team in 1991 and despite having not played for the county at minor level, In 2004 O’ Connor was given his senior debut in a championship match against Fermanagh and went on to establish himself as a main starter on Billy Morgan’s team in 2006, O’ Connor then went onto play in the 07 final defeat to fellow Munster rival and neighbours Kerry.

O’ Connor remained a key and noticeable figure in the squad under Morgan’s successor, his Aghada clubmate Conor Counihan who was part of Morgan’s backroom team at the time and was the favourite to take over the role as manager. That position was given to Teddy Holland but following a lengthy strike by the players in 07, Holland was removed as manager without overseeing a single game in charge and Counihan was appointed manager in February of 2008.

O’ Connor then went on to play in 2009 final in which he again lost to rivals Kerry, but the following year won the elusive Celtic Cross when the county finally claimed the Sam Maguire ending a long barren spell of 20 years. During his impressive career in the red and white jersey O’ Connor won three Munster medals, four-national league medals three Division 1 and one Division 2, and also represented Munster in the inter-provincial championship.

In terms of O’Connor’s club Aghada based in East Cork, he was a key member of the Rostellan senior football team and also played with the hurling team including the 05 defeat against Ballinhassig in the Cork County premier intermediate final.
Former Cork, All-Ireland winning manager Conor Counihan and fellow club mate of Kieran was amongst those who paid tribute to the former player, Counihan who was the manager for O’ Connor’s last four years with Cork, commended his bravery and dignity with which O’Connor battled cancer.

“The test of any fella is when you’re in your darkest hour. All Irelands and things like that pale into insignificance. He just managed himself so well over the last two and a half years. He never stopped being out there. Most of the time you meet him, you wouldn’t have known there was a whole pile wrong.
“We knew he was suffering physical pain never mind anything else, but he was just strong for himself, his wife Sinead and his family (children Isabella, Ava and James).”
Counihan recalls O’ Connor as a feisty competitor on the field and an unassuming but sociable man of it.

“When the kids came along, he put a massive focus on them. Sinead and them, that’s what it was all about for him. He’d be fairly laid-back outside sport and great company. As a father and a husband, you couldn’t say enough about him.