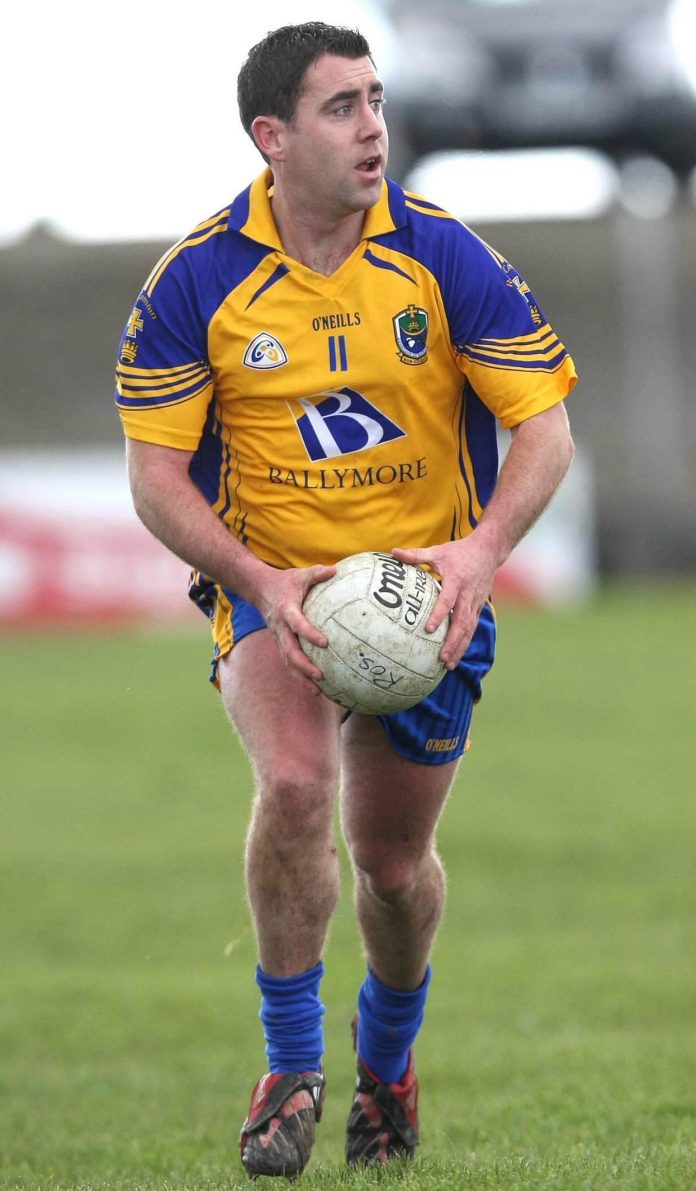 Frankie Dolan is, without doubt, one of the first names you would think of, with regards to Roscommon football. The former Roscommon starlet turned coach, is well known for his unerring accuracy from open play. The St Brigid’s clubman was instrumental in his side’s narrow win over Dublin’s Ballymun Kickhams in the 2013 All- Ireland club final in Croke Park. His talent over the years is undeniable. This is something that required a lot of determination and sacrifice. He said: “Well, I lived in Athlone originally. I went to school there for a year or so and then moved to Kiltoom in Roscommon. I have two brothers and one sister. We would have been very close for as long as I can remember. The GAA is in our family. My sister is actually engaged to a man from Setanta in Dublin. It would have been a big part of our family growing up. Soccer was actually my first love, believe it or not. I think it made playing gaelic football easier for me in terms of my determination as a player. I played soccer with Athlone and Bohemians. I had played GAA underage, I remember we beat Castlerea in an U12 final. I didn’t play again until I was minor. I got offered soccer trials with Reading in England but had a bad injury. That put pay to that so from minor onwards I focused back on football.

Being such a prominent talent, Dolan remembers fondly going to club games within Roscommon. “My own club St Brigid’s weren’t doing particularly well at the time. We would have gone to a lot of Clann Na nGael games. Their go-to player was a man called Tony McManus. He would have been my favourite player growing up. He had everything. Getting to see him play was brilliant. I also had a great time with two clubmates of mine, Tom and Brian Lennon. I would have been coming on the scene when these lads were at the end of their careers. I was lucky enough to have played with them. I would say I owe a lot of thanks to one of my coaches, Danny Murray. We won a minor club championship with him in charge, in 1996. He told me that if I worked hard that I had a big inter-county career ahead of me. I am glad I listened to him, the man had won it all with Roscommon in his career. I am forever grateful to him. Obviously getting to appear in club All-Irelands and winning it in 2013 against Ballymun Kickhams, sticks out to me. They are the guys you have grown up with and sharing that experience in Croke Park was very special.”

Dolan loved his club days with Brigid’s and feels those close relationships between players were huge in their success as a team: “We have been through so many highs and lows as a team. I remember we were beaten in a club semi-final by Garrycastle, it was a difficult one to take. We had a great bond. The likes of Kevin McStay and Liam MacHale gave us confidence over the years. Kevin had a big impact despite being with us for only one year, whereas Liam would have been with us as a coach for a few years. They are great men and GAA people altogether. You would have some lads getting sick at training and cutting corners for sprints. All those memories make it what it is. I remember Shane Curran had to be carried off the pitch. Some funny stories and you look back on those times even to this day.”

These days ultimately led to a call up for Dolan in 1999. He said: “I had been involved with a few in house games in 1998, but I remember making my debut for Roscommon in a league match against Limerick. I would have been a serious competitor during my career. I would never have had a problem calling out a manager if I felt something wasn’t right. I would have treated every training session like a championship game. I do think that helped me improve my game. During those days as a forward, the game was more you against your marker. I was always of the opinion that if I was having an off day I wouldn’t show it. The game is about having both mental and physical strength. I knew if I showed a defender any weakness I was done. I was involved in some exchanges with players over the years, but I do think that made me the player I was.” Dolan played with some of the game’s finest characters. He said: “Gerry Lohan would have been a gas man. I remember he said in the dressing room one day if I could supply myself with the ball, I would win an All-Star. He had a funny way with words. He was a fine player. He scored the winning goal in the 2001 Connacht Final for us.”

Dolan experienced many fine years at both club and county level and his hunger never wavered. “One regret I do have and it is only a minor one, is that in 2008 under John Maughan, I went back playing for the county having been off for almost two years. I feel looking back now that I wasn’t ready physically for that level. I probably wasn’t fit enough either. I was almost 30 and I remember we got hammered by Westmeath. That would have been the only thing.” Dolan’s other love in his life is soccer and he felt as though he picked up a few things from some of Manchester United’s former greats. He said: “I loved Brian Robson and Roy Keane. They were as tough as nails. They both were well driven and brought their teams forward. My mantra would have been based on those guys I suppose. I am a United fan so I would have watched them play for years.”

Having been retired from football for over a decade, Dolan isn’t necessarily a fan of the passive style of play, both as a supporter and now a coach. “To be honest I don’t like the way the game has developed. I was a forward, so to me, I don’t like seeing corner- forwards dropping back into their own 45 to get possession. You cause teams more damage if you leave players in the forward line. The game is called football for a reason. I think we need to get back to that. This sideways hand-passing stuff isn’t nice to watch. I understand it was successful for teams gone by like Tyrone and Donegal. But for me going to Croke Park, I want to be entertained and see excellent attacking football. I do think the game has lost an element of that. I don’t pay 80 euro to watch defensive football. I do think there is hope going forward. I think Mayo, Galway, Tyrone, Donegal and Kerry are capable of beating Dublin. I think the dominance of Dublin is evident for all to see, but the key is Dublin have got their house in order and I think the grassroots level is where other counties could benefit. As a coach, I get my teams to go out and play attacking football. It is more about developing the players really. Showing them the way the game is played and then when they hit minor they can aim to win championships. John Costello has done great work in Dublin, so they deserve all their success.”

He continues, “I wouldn’t like to play nowadays. Getting to mark the likes of players like Cathal Daly of Offaly and Brian Lacey of Kildare are experiences I will never forget. I suppose it was less tactical and more up to you. I would have had to use my own head and ability and being accurate was key for me as a forward. If there were players I would have played with I would have to say Kerry’s Declan O’ Sullivan. He had it all. Accuracy off both feet. And awareness. Brian Fenton of Dublin is obviously a huge talent too. He is an all-round footballer. Can turn a game in a minute and, a joy to watch.”

Frankie Dolan’s autobiography ‘Outside of the right’ is available on presale from Easons, Bookstation and Kenny’s now and will be in shops from mid-May.

Champions League Final could be moved from St. Petersburg