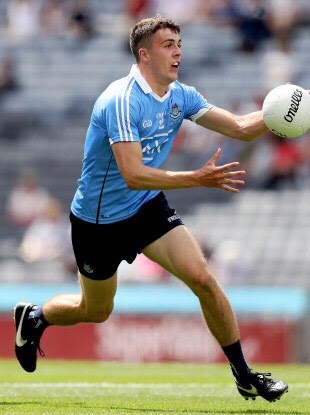 James Madden has had a fairly busy couple of years. The former Ballyboden and Dublin starlet now plys his trade in the AFL, with the Brisbane Lions. Madden was a promising dual star from an early age and admits the journey has been a hard but rewarding one. The 21-year-old is a sporty and family-orientated guy. He said: “I suppose where it started for me was back in Dublin. I have a fairly close-knit family. My parents are from Mayo and Westmeath and my stepmom is from Tipperary. I am very close to my cousins too. I would classify myself as being equally rural as urban, in that I spent many summers away on farms, with my family. I went to primary and secondary school in St Colmcilles and I actually loved school. I started playing GAA at a very young age and I suppose I decided on football because I felt there were more opportunities there for me. Dublin were doing well as I was growing up, so, unfortunately, I had to pick between Hurling and Football. I would have tried athletics, but to be honest I didn’t particularly enjoy that. Team sports were much more my area.”

Madden gives huge credit to his dad for his progression early on: “Dad brought me to my games over the years and would have been a huge supporter of mine. He would always have encouraged me. Any game he was watching, I would have taken an interest in. I suppose my hard work with Ballyboden and the Dublin development squads would have come from his influence. One of my earliest sporting memories would have been playing in the All-Ireland feile competitions with Ballyboden. We got to travel up to Derry and down to Limerick respectively. It would have been one of the highlights of my life to date. We won the Dublin football feile and ended up winning the All-Ireland hurling feile, which for someone so young was huge. That gives you a taste of success and I suppose I just worked hard to try and improve and develop. I would have started off coming home from school during the week and gone training Tuesdays and Thursdays, with matches on the weekends. I loved it. It allowed you to express yourself and a chance to hang out with your mates.”

As Madden headed into his teenage years, he got involved with multiple Dublin development squads. This was an environment that allowed him to truly show what he was capable of. He said: “When I was U14 I was lucky enough to get involved with the Dublin development squads. Back then the teams were split between North and South Dublin. I would have played for the south team. We played against the likes of Cork and Kerry, which was great. Up along we would have trained out in Clontarf. I suppose I believe I was lucky to be allowed to represent Dublin, as many lads didn’t. The older you got, the more the trials cut players. You were always given a fair chance. I was lucky that I stayed on the panel. I would have played with the likes of James Doran of Na Fianna and Dara O’ Shea, who now plays for West Brom in the premier league. He was a class footballer. We would have played in various mini-tournaments together. Over the years, there would have been various coaches, but Stephen O’ Shaughnessy from Lucan would have overseen the squads up to minor level. I think I learned a lot over the years. I think that the handling of the ball is the most important skill. At the time of the minor championship, I was playing midfield. I always thought that my athleticism and ability to receive the ball was actually better than my kicking. Some of the guys in training, the likes of James Doran, who I mentioned and Kevin O’Callaghan were guys who had great kicking ability in the team and we would have cancelled one another out, in training.”

Madden believes he has learnt a lot from the current crop of Dublin players: “The best advice I was ever given to this day was by Jack McCaffrey. At one of the Dublin camps I attended I would have let my player have an extra few yards and then try to make them up before he got clear of me. Jack told me to play closer to the man straight away so that he doesn’t have that option of running past you. I implemented it straight away and it made a huge difference. My main idol would have been James McCarthy from Ballymun. He always came back bigger and stronger. His athleticism was unbelievable. He is a unit. I would have tried to mirror him in a way. I remember we played against him with Ballyboden and I suppose that was a great experience for me.” Madden had a fine season with Dublin in his last year of minor and it was during that time that he was asked to go for an assessment, with other GAA stars to UCD. This was the journey that ultimately led to his transfer to Brisbane Lions in October 2018. “Myself and a group of lads from around the country got an email to a trial of sorts in UCD. After that, myself and a few lads got the chance to go and train with AFL developing players in Florida. To be honest the opportunity to go was too big to turn down. It all seemed to just progress very quickly. After Florida, I received an email from Brisbane and they flew over to Dublin to meet me and my dad. I was then offered an initial 2-year contract. I moved out in October 2018 and so far haven’t looked back.”

For Madden life down under has its ups and downs. He said: “Obviously the weather is a plus. I would argue the weather is too hot during the summer, but perfect in winter. You do always miss home no matter what. I think that is natural. I live in a place called Norman Park and I just love sitting out in the sun and going for coffee. It isn’t all fun and games. In terms of our training regime, pre-season isn’t the most enjoyable at all. You would have high-speed training on a Monday. Then you would have to cover a certain amount of distance on a Wednesday and back to high-speed training on a Friday. Weight sessions are thrown into that as well. You really have to work hard to make it here. During the season is where your hard work pays off. Wednesday and Friday would be our day’s recovery before a game at the weekend. Brisbane is a nice city, the people are friendly and I love the lads who I play with. I suppose if I was to look ahead I would ideally like to play 50 plus games. I would like to continue to work hard and I suppose I would like to be enjoying my footy above anything. If I did reach the stage where I wasn’t enjoying it I would have to have a serious look at the situation.”

James is content where he is at the minute, but his love for Dublin will never change. He said: “Would I ever like to play for Dublin again? Firstly there is no guarantee I would get in that team the way it is. I would never close the door on it happening of course not. However, I am happy here in Brisbane. I love playing Australian Footy and I love the lifestyle over here. I still struggle with aspects of the game. The ball is the main one. The round ball is a lot easier to get control of than an oval ball. Picking up the oval ball on the run is tough and also trying to use the proper technique to take the ball off your opponent is difficult. I am still learning in those areas. I have to say I am enjoying watching the GAA from afar. It is great seeing Dublin winning so much. The lads on that team work incredibly hard. They have a great system in operation. My friend from home, Kieran Kennedy is looking to break into the Dublin squad this year. I can’t complain about how dominant they are at the minute. I am a blue after all.”