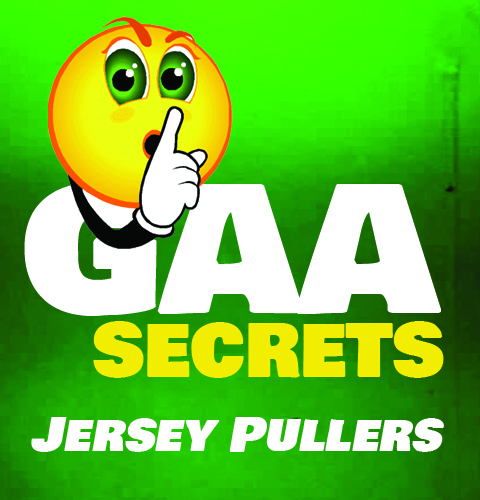 The semi final is deep into injury time. My lungs are burning, my legs are aching and my knuckles skinned to the bone. But none of that matters because we are winning. Come on ref for feck sake, blow it up. He looks at his watch and asks for the sliotar. The game is over and we know we are in an All Ireland final. I drop to my knees in relief and think of the All Ireland final, the banquet, being measured for a suit, jersey pullers and evolution. Jersey pullers and evolution – say what? Let me explain.

The term WAG became popularised during the 2006 Football World Cup in Germany thanks to Victoria Beckham, Coleen Rooney, Cheryl Tweedy-Cole-Fernandez-Versini, et al. The term WAG has gone on to develop negative connotations. Men don’t respect them and women think they’re sluts. Good for nothing except seducing young sportsmen in trendy nightclubs and being pregnant before breakfast.

Now I played a bit of five a side in my day but I certainly never played in the Premiership and unfortunately I never scored with a WAG. That’s because in Ireland we don’t have WAG’S, instead we have the jersey puller. The jersey puller is also looked down on by some. Well, I think this is unfair. A WAG might end up rich and famous but a jersey puller never will. GAA players are not paid a cent for their sport and although we might feel famous every time we play in Croker or attend the All Stars awards, the fact is most of us are faceless names in a match day programme. OK I might get recognised as I walk down my local high street but I don’t exactly have paparazzi camped outside my front door, and I might have a cushy job with perks because of my GAA connections but I’m not quite pulling in a seven figure salary, dream on. So if they are not with us for the fame or the money then why are jersey pullers attracted to GAA players at all? Answer – evolution.

Hear me out. We all find different things attractive. We all have a certain type but generally we all agree that slim, healthy and energetic is sexy. There are of course exceptions, I believe these are known as fetishes (have a quick Google if you wish). It all breaks down to reproduction and survival of the fittest. We subconsciously choose our partners based on their ability to provide us with healthy offspring. That is why we want athletic, toned, virile partners; because they will provide us with healthy children that will thrive and continue our lineage. So there you go. The jersey puller is simply trying to score with Johnny Intercounty because he will give her a healthy brood.

Now I am no oil painting. Don’t get me wrong I’m not a train wreck or anything but generally when I was younger and before I made the county team I had to settle for a certain standard of girl. I was an ordinary Joe so I was quite happy with a plain Jane. This started to change around county minor time. I was able to up my standard from a 5 to a creditable 6. By under 21 I was scoring with 7’s fairly regularly. I was happy with my lot. But things start to change once you are in a senior All Ireland final.

The night of the semi final win we all head out for a few celebratory drinks. At the start of the night you are just having a laugh with the boys and taking all the free drink and congratulations that come your way. After a while though you can’t help but notice that the place is full of women wearing the county jersey. The head is pure sunburned off half of them. They must have been on the Hill. Maybe it’s the drink playing tricks with my imagination but I’m sure that a lot of these women keep looking over at me. And again this may be the drink but some of them look pretty stunning. Play my cards right here and I might jump straight from a 7 to a 9. An hour or two later and everyone in the pub is starting to get fairly well oiled. The jersey pullers are closing in around me. I’m like a Serengeti impala and the lionesses are circling their prey. Bring it on.

The first one tries her luck. She’s wearing a straw cowboy hat with a county headband tied around it. “Well done today, you played brilliant”. Thanks yeah, ah sure things went well. “You looking forward to the final now?” Yeah, can’t wait. I have to admit this one looked better from ten feet away. She is caked in makeup. I wish she would just feck off now. However this little back and forth hasn’t gone unnoticed by the other jersey pullers and it may yet work to my advantage. The other girls are visibly jealous and they are positively straining at the leash to get at me now.

I spot one lurking a few feet away and she would definitely be the best looking girl a lad like me would ever have a hope with. She is blonde with sexy secretary glasses. To be fair she is way out of my league but hey, she might like her county men and I’m feeling cocky so I’m going for it. I excuse myself from the clutches of straw cowboy hat girl and make my way towards the gents. Blonde secretary glasses is in my path. I brush past her and make a point of touching her arm and saying excuse me. “No, please excuse me and well done today”. She is all over me like white on rice. I’m in. I will spare you the rest of the gory details but let’s just say I was spotted leaving Supermacs with her a few hours later. Winning an All Ireland semi final, getting off with a 9, and a taco fries all in one day.

What a time to be alive. Thank you evolution.