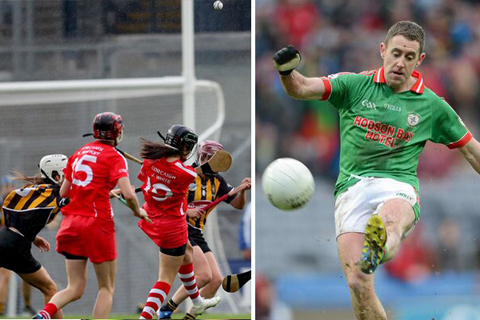 On that St. Patrick’s Day four years ago Curran was part of the St. Brigid’s side that came up against Ballymun Kickhams in the final. The Roscommon club made a comeback in that game with Dolan kicking over the match-winning point in injury-time to bring the title back to Roscommon.

Speaking on GAA Sunrise Curran said: “It’s the finish nearly everybody wants. Going back to my own time it reminded me of Frankie Dolan’s winning point four/five years ago in the club final. It’s just the last throw of the dice and you go for it. What a score to win the game.”

There were other similarities between Brigid’s and Cork’s camogie side; both had been defeated in the final the previous year. Cork were not going to let the Cats claim victory on Sunday as they brought the O’Duffy Cup back to the Banks of the Lee.

GAA Sunrise presenter Chloe Kelly commented on White’s tough journey to get to where she was on Sunday. She said: “Previous captain of Cork, she battled with injury for two years. She was only on the pitch a couple of seconds and she stepped up and scored that unbelievable score; the match winning score. It just goes to show you as well that leaders are on the subs bench as well.”

Curran praised White’s attitude in coming off the bench and making such an impact: “You seen a person that was able to come off the bench, prepared to give everything and get her just reward by popping over a tremendous score for herself, her team and her county.”

GAA Sunrise Episode 2: “Kerry are looking for improvement from players...