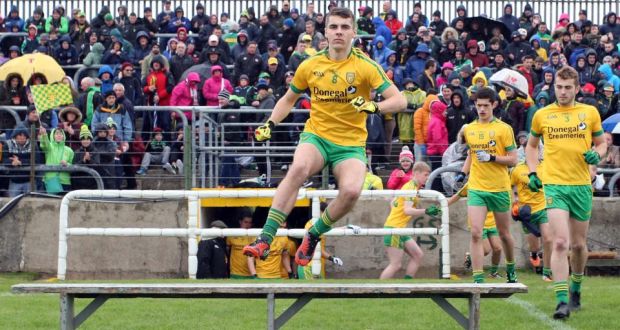 Gaelic Football at intercounty level has evolved considerably in the last decade. Teams have gone from playing a traditional 15 man game, through to a one sweeper system to help shield the scoring zone, to an all out blanket defence. With both teams attacking and defending in unison it has at times descended into an over sized game of basketball. Could a basketball style rule change offer a possible solution to finally over-riding the blanket defence?

Defence in basketball is based around flooding the floor in front of the rim and closing off space for running angles and easy scores. Sound vaguely familiar? However if a team defends too deep and does not pressurize the shooter, an opposing player can try for a long-range basket, worth 3 points. The Golden State Warriors, the 2015 N.B.A champions, based their game around consistently draining 3 point attempts to break their opponent’s will.

As witnessed in the Ulster Final defensive systems in football have become almost too efficient. Teams are able to defend deeper, blocking off any route to goal, and can limit the opposition to long-range shooting from outside the 45 yard line. But what if, like in basketball, teams were encouraged to shoot from long range in the hope of securing an extra point?

A score from outside the ’45 being increased to equal 2 points could be a game-changer, handing the initiative back to the attacking team. If the extra point was added it would be an incentive for teams to shoot from deeper. One of the best skills that football has to offer is a booming long-range point. It is an amazing skill that should be rewarded as such.

The defensive system could be breached as teams could bypass it aerially looking for the 2 point score. Tyrone who generally set up base camp on their ’45 would be obliged to press higher up the field to limit these scores. Rather then engaging the attacking team on their 45 yard line the defense would be obliged to push higher up the field. The scoring zone would be increased in size thus making it harder for teams to defend space.

And if these defensive systems pushed up too high? Well their full back line would be exposed and susceptible to an aerial bombardment with less cover in front to help. The long ball into the full forward line would again be a creditable attacking option. The big full forward would not be surrounded by a mass of defenders if he won his aerial battle with his full back. The swarms of defenders would no longer be buzzing around the breaking ball like fruit flys besieging a jam jar.

While this idea may sound radical in essence it would be easier to enforce than other ideas proposed in the national media. Jim McGuiness, the father of the blanket defence, suggested 3 attacking players from each team must remain inside the opposition 45 yard line at all times. The officials ,under enough pressure already, would have an awful time monitoring that scenario.

Joe Brolly feels that for a kick out each player must assume their traditional positions, with only the four midfielders inside the two 65 yard lines. This is an interesting idea and could possibly eradicate the short kick-out. However, their is potential for lengthy delays during the game as players return to their positions and could lead to a lot of frust.

The 2 point score is an attacking incentive for teams and rewards players for taking the chance on a long-range point. It would not affect a manager’s ability to set up his team defensively but it might limit the effectiveness of the sweeper system. Crowds are crying out for attacking football and this, like in basketball, adds another string to a forward’s bow.