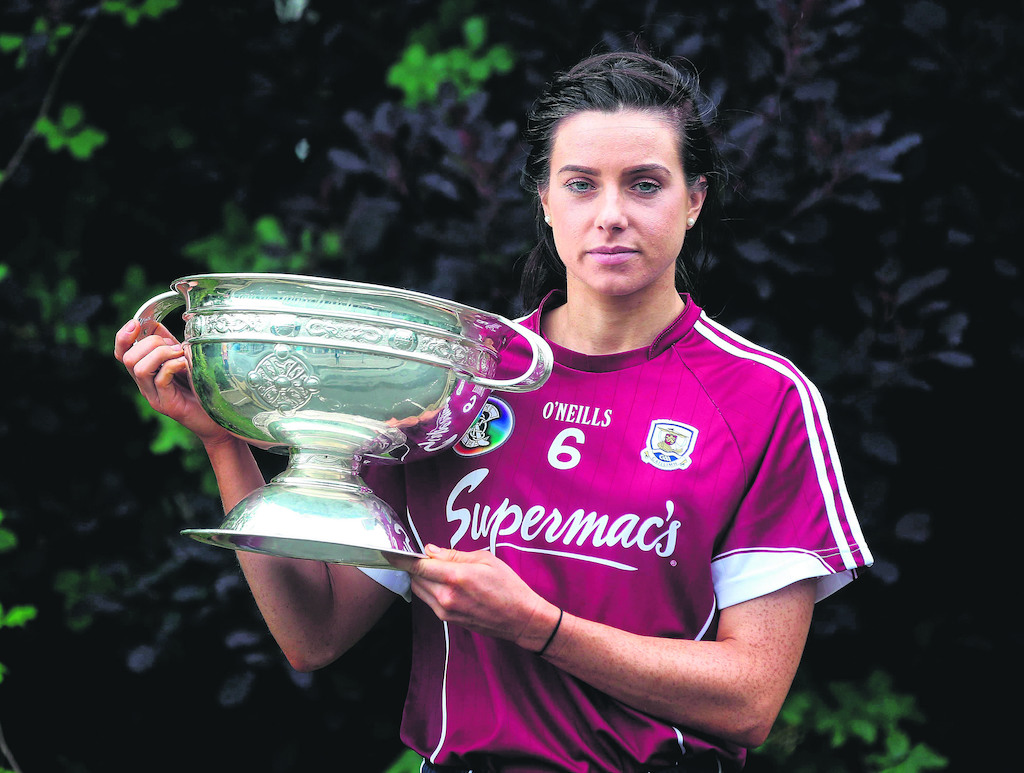 In the second of our interviews with some of Ireland’s top inter-county camogie stars Sportstalks’s Ger Kinane spoke with Galway centre back Rebecca Hennelly. Despite only turning 23 years of age at the beginning of May Rebecca or Becky as she is known to her friends has already won 2 Intermediate All-Irelands with Galway, 1 Senior All-Ireland, an All-Star in 2016, has had 2 cruciate knee operations and runs her own business.

A remarkable number of experiences some good and some not so good packed into a young life. Speaking to Rebecca and knowing that she is only 23 I wonder how many other 23 year olds are up at 5.15 in the morning to teach a strength and conditioning class @ 6 am and are eventually getting back into bed just before midnight after a tough evening training session with their county. And they say ‘youth is wasted on the young’. The saying couldn’t be any more irrelevant when it comes to Galway camogie’s centre back from Ardrahan.

July will mark a year since the opening of her own gym Powerhouse Gym. A business she decided to open with her boyfriend Ronan Taafe. It’s a brave move for any person deciding to open their own business however Rebecca acknowledges she wouldn’t have done it on her own.

From a young age Rebecca was destined to wear the maroon and white. Staring with her club Ardrahan it wasn’t long before she was called into the Galway county panels where she also excelled winning 2 under 16 All-Ireland titles and a minor All-Ireland in 2010. At that stage Rebecca was playing all her camogie in the forwards proving to be a potent attacker at wing or centre forward. In 2011 Noel Finn the then Galway manager called her into the Senior set-up. When the call came to start against Offaly in the championship the then 17 year old Hennelly was thrilled and couldn’t wait to make her debut. If one was told at that time that Rebecca would go on to win her first All-Star by 2016 those who had seen her play wouldn’t have been overly surprised.

However if in the summer of 2011 you were told that the young up and coming camogie star would tear the cruciate ligament in her knee not once but twice before going on to win an all-star all by the end of 2016, now that would have seemed impossible!! But amazingly that is exactly what did happen. On the Thursday before she was due to make her senior championship debut Rebecca went to the local GAA pitch to watch her club training. With the hurley and sliothar always present she was casually pucking the ball around the field and when running to retrieve it felt her knee buckle. Looking back to that time Rebecca recalls how she didn’t put the work into the rehab that was needed

‘I was so young at the time, only 17. There weren’t many people around who had done their cruciate before and I didn’t realise how important it was to do the rehab and the importance of the strength training’.

Despite the setback by 2013 Rebecca was back playing and winning with Galway. She was a key member of the Galway Intermediate team that won the All-Ireland in Croke Park and was part of the senior panel that also won the All-Ireland in a unique double for the Connacht side. It was a memorable day for Galway finally lifting the O’Duffy Cup after years of heartbreak. Galway camogie was on an upward spiral and so was Rebecca’s own playing career. She helped her club Ardrahan win their first ever senior county championship soon after and by March she was back in Croke Park contesting another All-Ireland, this time with the club against Millford of Cork. Millford would go on to win that day but Rebecca would go on to finally make her senior debut with Galway in that summer’s championship. Shortly after their campaign ended club championship was in full swing again when during another hard fought contest she would feel the same knee that buckled years earlier go again. Her worst fears were soon revealed and it was back to Waterford and Doctor Tadhg O’Sullivan for her second cruciate knee operation.

Amazingly retirement or pursuing a different less physical sport never crossed her mind. Once surgery was complete Rebecca was determined to get on the road to recovery and back fulfilling her potential with Galway. It was an older more mature player this time. Throwing everything into her rehab she embraced the gruelling exercises and spent long hours in the gym building up the strength in her knee and surrounding muscles. ‘I was much more focussed on the rehab this time. I understood the importance of it and put loads of work into it this time compared to the first time. I really enjoyed the gym work and discovered a passion for strength and conditioning. I was working in a factory in Galway at the time but had no interest in staying there for life so I decided to do a part-time strength training course’.

It was this drive and ambition that not only had her back playing and winning with Galway but also drove her to open up her own gym. Most people after completing a similar course would be happy to work in a gym for a few years and build up the experience before perhaps someday setting out on their own. But listening to Rebecca I get the feeling that she is not like most people. Before long her and Ronan were literally knocking down walls and setting up the Powerhouse Gym.

‘It is a lot of work and it can be tough spending your day training people and then having your own training and matches to go to also with Galway. Recovery and rest is so important and I have to constantly eat right and try and get to bed early’.

In 2016 all her hard work paid off when she scooped her first All-Star. Despite playing most of her formative years as a forward Rebecca has made the centre back position her own. I ask her who is the toughest opponent she ever marked and she quickly replies Kate Kelly.

‘I came across her a few times when we played Wexford and she’s always very difficult to mark. She is one of the best in the country’. Speaking of the best who is the best player you played with, with Galway? ‘It would have to be Therese Maher. Therese was just a phenomenal player. When I first came on the Galway panel I use to play centre forward and I often had to mark her in training, so I witnessed first-hand how good she was. She is still badly missed in Galway’.

Talking of great players I ask Rebecca if there was a transfer market who would she buy in from another county to play with Galway. ‘I would have to pick Denise Gaule from Kilkenny. She’s just a fantastic player and can play anywhere’

Galway have a new management team this year and Rebecca comments how ‘training is going really good. There is a good buzz in training and everyone is looking forward to the start of championship’. Mark Dunne is the new manager and despite using the league to try out new things and to look at different players, Galway still won all their group games and qualified for a league semi-final. ‘Things were going really well in the league, but we got caught by Kilkenny in the semi-final’. Rebecca is looking forward to getting another ‘crack at Kilkenny when we meet in the group stages of the championship’. Galway are in a group along with Kilkenny, Waterford, Clare and Dublin. ‘Our first game is away to Dublin and this is our complete focus at the moment’.

Manager Mark Dunne is joined by his sister Molly Dunne a well known Galway player who only retired from playing at the end of last season, strength and conditioning coach Tom French, Damien Curley and former Dublin Hurler Niall Corcoran. ‘There’s lots of variety in training as all the management team take turns taking different aspects of the session’.

Speaking to Rebecca there’s a definite air of content at how Galway are progressing this year and in the preparation for championship. That content stretches to all aspects of camogie in general as I finish our conversation by asking if she had a magic wand and could change one thing about camogie what would it be? ‘There isn’t anything I would change at the moment. Coverage is constantly getting better so I don’t think there is much to complain about.’

With 6am classes to teach and championship around the corner she doesn’t have time to complain, she’s too busy driving forward with work and Galway!!