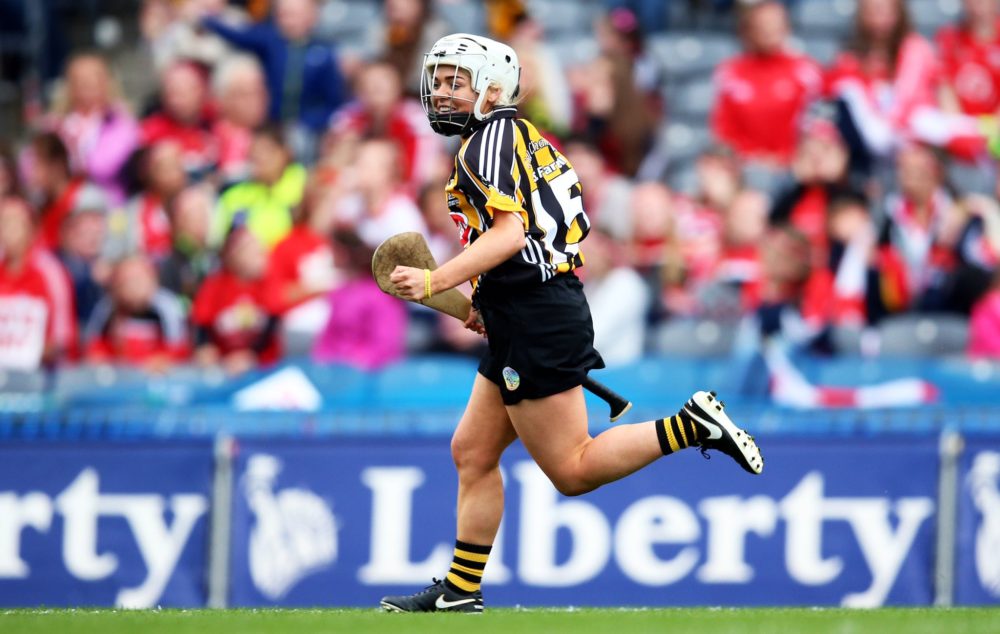 It was a day to remember for both Kilkenny and Carlow Camogie as they left Croke Park on Sunday with a share in all three trophies on offer. Kilkenny’s senior team ended a 22 –year famine to capture the O’Duffy Cup and add to the Intermediate title won earlier by the Cats.

While Carlow topped off a fantastic 24 months by defeating Armagh in the Premier Junior final a year after winning the Junior A title and gaining promotion.

When the pre-match parade concluded, Kilkenny quickly ran to the far side of Croke Park in front of an empty Cusack Stand away from the cheering crowds. A few moments of silence to compose themselves after the obligatory parade, meeting the President and the surprisingly tension filled pre-match handshake between the teams. In what was surely a pre-planned move they took the opportunity to gather their thoughts again and focus on the task in hand.

Today was to be their day, the hurt of 3 recent final defeats along with a 22-year spell since their last success on this stage was all fuel to help them finally deliver All-Ireland glory back to the Noreside. They needed cool composed heads from the start and to stick to their game plan but above all to bring a ferocious work rate to the table. As the final whistle blew a great sense of satisfaction must have swept over Ann Downey. Everything had gone to plan.

Trailing just once over the 60 minutes Kilkenny were by far the better team and fully deserved their win. Their work rate and team play as a whole was excellent topped off by a superb Shelly Farrell goal in the second half which gave them a crucial cushion. They were unlucky not to have had a goal in the opening half when Michelle Quilty snuck in behind the Cork full back line, but her ground stroke went inches to the left of the post. In a tactical masterclass Downey and her backroom team clearly had their homework done on this Cork team going for their 3-in-a-row. Denise Gaule played as an extra midfielder and she popped up everywhere, linking up with her defence time and again and delivering ball into her forwards.

In a bid to suppress the dominance of Gemma O’Connor at centre back Kilkenny constantly used the wings or ran the ball from deep in a fantastic display of fitness and passing. For this to bear fruit they needed forwards on song and in player of the match Julie Ann Malone they had this. Despite playing her first year at senior level she finished with 4 points from play, 2 in each half each as impressive as the next. At midfield Anna and Meighan Farrell put in an unbelievable shift with Meighan setting the tone early with the first score of the game. Up front despite being out numbered on most occasions Michelle Quilty and Katie Power stuck to their task and showed great intensity in every tussle.

Power came into her own in the second half providing the all-important pass to Shelley Farrell for her goal before scoring a superb point from distance to add further pain to Cork. Despite only trailing by 2 points at the break 8 points to 6, Cork who have been fantastic champions over the last two years had no answer to Kilkenny’s work rate and hunger. Kilkenny crowded out the midfield area preventing Cork from exerting their usual authority. While tenacious tackling by the Kilkenny backs never allowed the Cork girls to get going and they looked flat in contrast to the sharp Kilkenny play.

This led to frustration on the Cork side and the eventual dismissal in the second half of Gemma O’Connor for two yellow cards. Cork could have had a first half goal when five minutes before the break Hannah Looney caught an excellent free from Gemma O’Connor and was heading for the goals before being dragged down for a penalty. Up stepped Aoife Murray, her bullet of a shot was stopped on the goal line by Ann Dalton and deflected over for a point.

It was then one got a sense that today belonged to the black and amber. At times full-forward Briege Corkery wondered out the field that she graced on many occasions in a bid to get a score. Each time she was followed by full-back Davina Tobin who gave a masterclass in man-marking. Alongside her Collette Dormer was having a stormer while Ann Dalton showed real leadership once again at centre back to ensure that Kilkenny at all times kept their structure and didn’t allow Cork in for an easy score.

Denise Gaule finished the game with 7 points from frees as she showed her outstanding talent from placed ball.  Orla Cotter goaled from a free late in injury time but it was never going to be enough and it was the Kilkenny captain Michelle Quilty who was walking the steps of the Hogan Stand after the final whistle.

Two Thrilling Semi-Finals Pave the Way for a Mouth-Watering Final in...