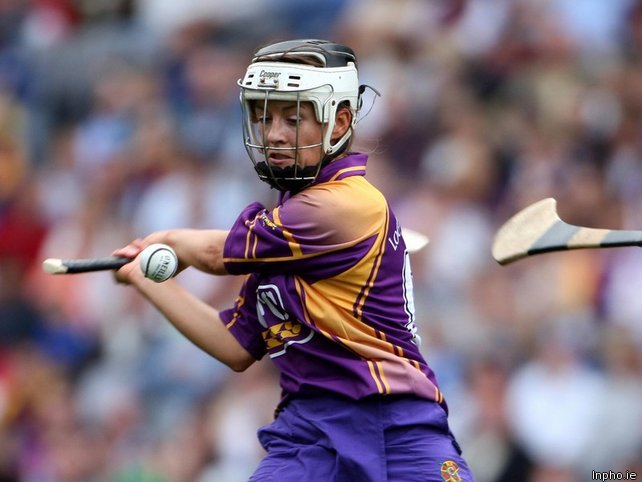 The pairings for the 2016 Liberty Insurance Senior All-Ireland Camogie Semi-Finals is now finalised with Kilkenny drawn to play Galway while Wexford and Cork will also square up on Saturday 13th August. Wexford earned their place in the semi-final thanks to a great comeback against Tipperary while an impressive win over Offaly earned Kilkenny a last four spot.

Tipperary players dropped to their knees in despair when the final whistle sounded in Walsh Park as Wexford emerged victorious after a thrilling game. Talk after the game surrounded around two things, the brilliant display by a young up and coming Tipperary team and the unbelievable equaliser by Kate Kelly in the 6th minute of injury time. Few people gave Tipperary any chance up against a Wexford team who had beaten Cork in the group stages and scored a whopping 7 goals in their final group game against Clare.  But it was Brian Boyle’s team who showed all the signs of a team brimming with confidence and skill in the opening exchanges as they opened the scoring with a Nicole Walsh free in the 2nd minute and added to their lead with when Orla O’Dwyer struck the first of her 4 points from play 2 minutes later. Both sides exchanged points and after 15 minutes an Una Leacy point put the sides level with 4 points each.

The next 15 minutes belonged to Tipperary as they hit a real purple patch to outscore their Wexford counterparts 6 points to 4. The Tipperary management looked to really have had their homework done and were getting their match ups right with Megan Ryan assigned to centre forward to curtail the dominance of Mary Leacy while also chipping in with 3 points of her own. The second, a great score after a brilliant run from Ereena Fryday. Captain Mary Ryan who had played most of her camogie this year at centre forward was picked to start alongside Teresa Ryan in midfield and this positional switch had a huge bearing on the opening half as Tipp dominated proceedings in the middle of the field. At the break Wexford trailed Tipp by 5 points, 0-10 to 0-5.

With Tipperary’s inside forward line of Orla O’Dwyer, Miriam Campion and Roisin Howard causing the Wexford defence all sorts of problems the young Tipperary side started the second half where they left off with 3 points from Orla O’Dwyer (2) and Mairead Teehan. However just as Tipperary were beginning to extend their lead Una Leacy struck her 8th goal of the championship so far to bring the gap back to 5 points. A minute later Orla O’Dwyer was through on goal but was denied a green flag thanks to a great save by Mags Darcy in the Wexford goal. Kate Kelly and Nicole Walsh exchanged points from frees before Mags Darcy was called upon once again to make 2 point blank saves to deny Mairead Teehan and Miriam Campion.  Teehan’s shot was deflected over the crossbar in the 46th minute to give Tipp their 16th point and amazingly their final score of the game.

Two more points from the accurate Kate Kelly and a 51st minute goal by Emma Walsh ignited the Model County and it was now time for their purple patch. Spurred on by the hard-working Shelley Kehoe in midfield and the ever industrious Kate Kelly Wexford started to come more and more into the game and the comeback was truly on. In a bid to stop this, Tipperary employed Miriam Campion further out the field and despite winning some key possession the Wexford management freed up Mary Leacy in defence who swept up everything that came into the danger area in the final 10 minutes.

It was edge of the seat stuff as both sets of fans got behind their team and when Katrina Parrock connected first time on a dropping ball in the 61st minute it sailed  over the bar for the equalising point. With the 5 minutes of injury time signalled coming to an end it looked like the game was heading to extra time, but Kate Kelly had other ideas. In the dying moments of the game she travelled deep into her own half to force an overturn and win a line ball. Louise O’Leary cut a lovely sideline straight into Kate’s hand and despite being 45 metres out, close to the side line and the rushing onslaught of the Tipp defence she cooly slotted the ball over the crossbar to the delight of the Wexford followers.

It was a dramatic end to a pulsating game of camogie. And while Brian Boyle’s outfit will bitterly disappointed to exit the championship after giving up an eight point lead in the second half they can take great credit in the manner they approached the game, the great attacking play and tenacious defending but above all knowing that many of their young players came of age and can now compete with the best.  They had great performances throughout but in particular, Mary and Teresa Ryan, Ereena Fryday, Mairead Teehan Aoife McGrath and Orla O’Dwyer. Wexford will know they left it late and could very easily have missed out on progressing to a semi-final. They will need to show a big improvement if they are to get the better of champions Cork the next day.

The management will however take plenty of heart in their spirited comeback and never say die attitude and no doubt the manner of their win will bring them closer. While Kate Kelly will deservedly take most of the credit for their win, Mags Darcy too gave a heroic performance in goal and kept her side in contention with some top-drawer saves throughout the 60 minutes. On reflection Wexford’s ability to score their 2 goal chances and Tipp not registering a single goal despite 4 clear cut chances was the main difference between the sides.

Kilkenny laid down a real marker in the other quarter final with a convincing 11 point win over Offaly. An early goal by Julieanne Malone put Kilkenny in the driving seat and they never looked back  as Offaly struggled to get to grips with the tempo of the game.

Miram Walsh, Anna Farrell and Michelle Quilty all pointed as Kilkenny raced into a 1-04 to no score lead while Offaly began to look in real trouble. Michaela Morkan who has been brilliant all year got Offalys first score of the game from a free in the 10th minute but it was Kilkenny who continued to dominate proceedings with excellent running from all 6 forwards resulting in further scores.At half time they led 1-11 to 6 points.

The lead could have been greater as Shelley Farrell was through on goal just before half time but her shot was brilliantly saved by Offaly keeper Eleanor Clendennen.  Offaly re grouped at the break and were much more competitive from the restart but Kilkenny never faltered and the result was never in any real doubt. Denise Gaule and Michaela Morkan continued to exchanged points with both players finishing with 6 points apiece. Despite Offaly’s best efforts they couldn’t get enough quality ball into their forwards and in particular the danger pair of Tina Hannon and Arlene Watkins.

Hannon and Watkins found themselves tightly marked at all times and had to settle for a single point each. For Kilkenny player of the match Miriam Walsh was superb all day with 3 points of her own. With 9 different scorers in total Kilkenny posed a real treat up front that the Offaly defence had no answer for. On the stroke of full time Offaly were awarded a penalty but Michaela Morkans shot was brilliantly saved and it was Kilkenny who were celebrating at the final whistle and looking forward to a third meeting against Galway on August 13th.

Offaly will disappointed that they didn’t pose a bigger challenge and will no doubt regret their slow start. They have however had a great campaign with some memorable wins in the group stages in particular over Wexford and can look forward to next year’s championship with confidence.