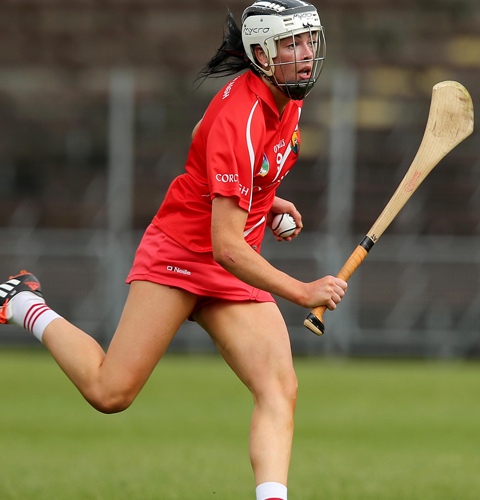 Two first half goals from Paudie Murray’s Cork team gave them the breathing space they needed to hold off a Galway second half fightback and book their place in next month’s All-Ireland final for the fourth consecutive season. Cork were the better of the two sides for the opening 30 minutes but a rejuvenated Galway team dominated the second half and tried everything in their power to  get the better of the rebels.

Galway displayed a nervy opening 30 minutes with shots dropping short or going wide of the target. Cork playing with the aid of the wind could have had a goal after 2 minutes when Katriona Mackey’s attempted hand pass goal rebounded off the crossbar. Instead it was Orlaith McGrath who registered the first score of the game – a point from play after 4 minutes. Cork quickly took the lead with 2 points in succession from an Orla Cotter free and a point from play from Orla Cronin. Niamh McGrath had the sides back level with a point before a crucial turning point in the game came after only 10 minutes when Cork’s Niamh McCarthy was pulled down going through on goal by Rebecca Hennelley. Aoife Murray made sure her long run up from goals wasn’t in vain as she blasted her shot to the roof of the net. The Galway response was good with a point from Ailish O’Reilly before an excellent score from out on the wing by Aoife Donohue. Both sides continued to exchange points when the killer blow came from Cork in the 28th minute. Player of the match Orla Cotter caught a high ball and proceeded to head straight for goal. In a mix of good luck for Cork and poor defending by Galway Cotter attempted to lay the ball off to Hannah Looney but instead the sliotar rebounded to her and she then bundled it over the goal line to give Cork a 2 goal lead at the break 2-6 to 0-6.

Cork had 2 points in quick succession upon the re-start from Katriona Mackey and Hannah Looney which pushed them 8 points clear. However amazingly they were to go the next 28 minutes without a single score as Galway sprung to life. Aoife O’Donohoe who led the Galway fight back took over the free taking duties and she pointed the first of her 3 second half points in the 38th minute. Another turning point of the game came in the 45th minute when Gemma O’Connor had to go off with an ankle injury. The Cork defence seemed to lose their shape and Galway capitalised on this with substitute Niamh Hannify getting through for a goal to put 3 points between the sides 2-8 to 1-08.  Another well executed free from the brilliant Donohoe reduced the margin to just 2 points and Cork looked to be in real danger. But Aisling Thompson, Rena Buckley and Chloe Sigerson all stood up and defended bravely as Galway went in search of a winner.  Instead it was Mackey who pointed at the opposite end to bring the lead back to 3 and after 5 minutes of injury time referee Eamon Cassidy blew the final whistle calling to a halt a highly entertaining second half of camogie.