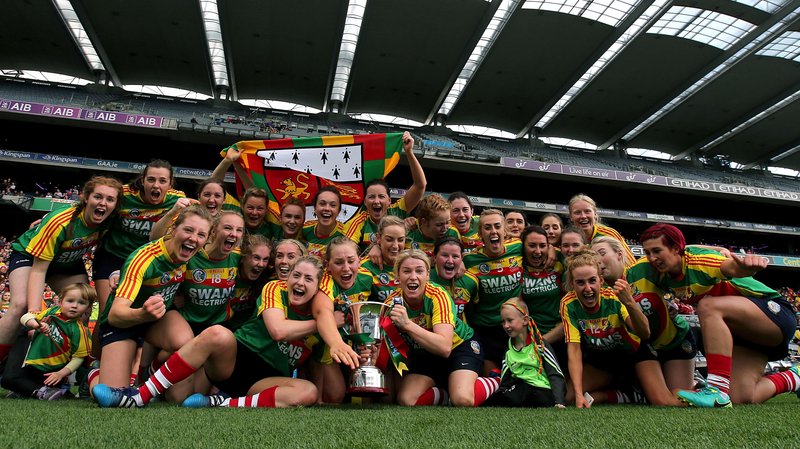 It was fairy-tale stuff for Carlow who were crowned All-Ireland Premier Junior champions on Sunday and in particular for Ciara Quirke who bagged herself a hat-trick and 16 year old Rachel Sawyer who came off the bench to score 1-2. Armagh took a 1 point lead going into the break after Quirke’s first goal of the afternoon was cancelled out by Collette McSorley. Substitute Rachel Sawyer had a huge impact on the game with her pacey runs allowing her to get past the Armagh rear guard on more than one occasion.

A mistake by the Armagh keeper in the second half led to her fortuitous goal and with Eleanor Treacy reliable as ever on frees Carlow began to stretch into a lead. Armagh however hit back with a goal of their own and a contender for goal of the year. With 45 minutes gone Ciara Donnelly connected beautifully with an overhead strike to finish to the back of the Carlow net. Amazingly this was to be Armagh’s final score of the game as Carlow immediately found another gear and tapped on three points from Quirke, Sawyer and Treacy.

With 6 points between the sides approaching the final few minutes Ciara Quirke topped off a great individual display when she fired her third goal past Bronagh Mone in the Armagh goals.  Despite being favourites Armagh had no answer for Carlow’s second half performance and in particular their superior attacking force. It was a great day for Carlow camogie and in particular all the volunteers and coaches who have given years of service to the clubs. The team had great support in Croke Park as was evident in the loud cheer that erupted at the final whistle.