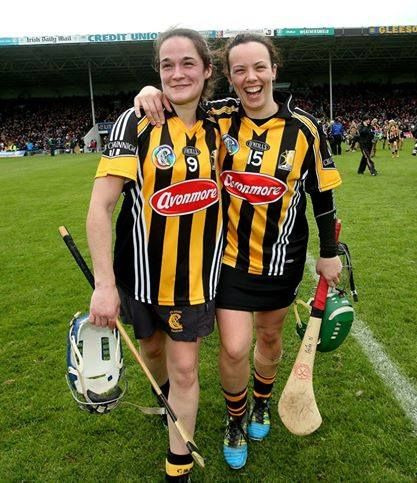 An injury time goal from substitute Jenny Clifford meant there were 8 points between the sides at the final whistle but this was far from a comfortable win for Kilkenny who were severely tested by a gutsy Dublin team. Kilkenny got off to a perfect start when an early attack after 2 minutes yielded a penalty after  Miriam Walsh was fouled. Denise Gaule stepped up and made no mistake in her shot. At this stage one wondered was this a sign of things to come and were we in for a one sided affair.  However Dublin had other ideas and responded brilliantly with points from Siobhan Kehoe and Aisling Maher both of whom impressed throughout the hour.  Kilkenny replied with 2 points of their own from Danielle Morrissey and Denise Gaule before Aisling Maher registered 2 further points for David Herity’s side. Dublin showed great composure and work rate throughout the opening half with Eve O’Brien , Miriam Twomey and Hannah Hegarty all working tirelessly. The scores however came that bit easier for Kilkenny and despite their forwards having limited possession they took their chances when they came finishing the half with 3 unanswered points from Miriam Walsh, Denise Gaule and Katie Power.  At the break Kilkenny led 1-5 to 0-4.

Kilkenny had the aid of the wind in the second half but it was Dublin who got off to the better start with a point from Siobhan Kehoe and a converted free from keeper Faye McCarthy. Every time Dublin looked to narrow the gap Kilkenny showed all their experience and class with a brace of points to keep their noses in front. Anne Dalton came more and more into the game with her surging runs out of defence and perfectly delivered passes into her forward line. What was notable also was the greater spread of scorers that Kilkenny had with 9 scorers in total compared to Dublin’s 3. Julie Ann Malone, Anna and Meighan Farrell and Michelle Quilty all chipped in with second half points as they exerted their authority on proceedings. Kilkenny’s substitutes also had a greater impact than they Dublin bench with Jenny Clifford and Michelle Quilty both getting their names on the score board. Two late points from Aisling Maher were cancelled out by Clifford’s late goal as Kilkenny ensured their dream of back-to-back titles was still firmly alive.