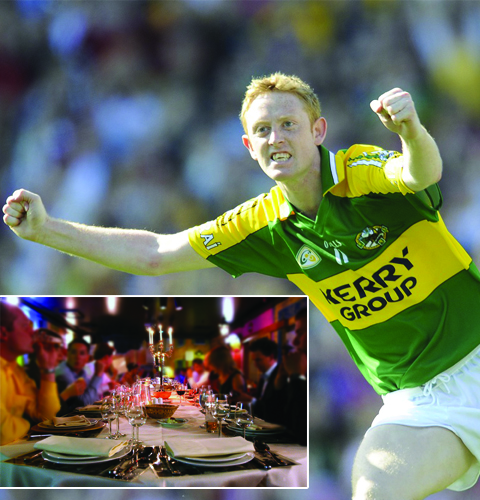 As you may have heard, unless you’ve been hiding your head under a rock for the last month, Colm Cooper is having a testimonial dinner next month. The ex-Kerry star is holding the event in the Intercontinental hotel in Dublin on the 27th of December, and could be in line to pocket anything up to 250,000 from it, albeit with an undisclosed portion of the proceeds being given to Our Lady’s Children Hospital in Crumlin and the Kerry Cancer support group. It’s the first high profile dinner of its kind for a GAA star in this country.

So then, Joe Brolly, what do you think of that? Well we know what he thinks of it, and of course, he’s not best pleased. Now, obviously, anytime we hear of an “amateur” or ex-amateur player, receiving payment for services to the game, there’s a lot of hand-wringing and gritted teeth. On one hand, there are those who argue that the man has given uncountable hours of service to the game and pleasure to those watching it, and deserves some sort of compensation for it. Then there are others (i.e. Joe) who take the contrary viewpoint that such activity is against the whole ethos of the organization. If he wants to argue that, and make a similar claim about the Sky television deal, then that’s his prerogative. But he is kidding himself if he thinks the process of enrichment for players/ex-players is not already well under way.

Even without testimonial dinners, there is already a well-worn path for the successful ex-player to make money for themselves from the game: Book deals, punditry gigs and newspapers columns are freely available for the Colm Coopers of this world. There’s also the fact that an elite GAA sportsman is in a much better position to put his name to a business than your average Joe Soap off a street in rural Ireland. That doesn’t automatically mean that skills on a pitch translate to acumen in the commercial world, as numerous high-profile liquidation cases have shown, but it’s an initial leg up certainly. Now Joe Brolly is a man who has never chosen (according to a recent Sunday Business Post article) to receive a cent from any of his extra-curricular activities in the GAA, and that, in its own way, is admirable. But there are others who have and will continue to do so. And in a way, can you blame them?

The powers that be in Croke Park have always been staunchly against any sort of payments to players, yet there’s a hypocrisy that comes with “preserving the amateur status” that is rampant in the GAA. Is it right to be complaining about the under the counter payments to managers across the organization when, say a president or secretary general of the GAA is getting a hefty wedge from the organization itself? Or taking millions a year off Sky or Eir Sport or whoever to televise our games? Or potentially ruining the Croke Park pitch in the summer for the sake of a few high-profile concerts? Because it’s one thing saying that money will destroy the game. But if you’re an association that is known for putting on American football in your main stadium, instead of your own games, for the sake of a few extra quid, then you don’t really have the moral high ground, do you?

Take for example the case of Davy Fitzgerald in Wexford. Now we’re not suggesting that Davy was getting paid anything untoward by the Wexford county board this year (for legal reasons anyway). But just in terms of travelling from Clare to Wexford, well, for sure they would have to pay a fair wedge in mileage expenses.

In a way though, could you argue if he did receive it? He brought a level of interest to the game in the county that hadn’t been seen in years. He filled stadia for Walsh cup games, brought 60,000 to Croke Park for a Leinster final. After years in the doldrums, Davy has made playing for Wexford an attractive proposition again. Now if somebody in the GAA found verifiable proof that Davy or any of his backroom team had accepted money for his managerial services this year there would be an outcry. But in any other business there would be a look at the investment, and the subsequent money generated in the game, and say “Well, that was money well spent”

This phenomenon is not just restricted to ex-players or current management teams. A few years ago, my father met a brother of an all-conquering inter county player. The player in question was approaching advanced years in the game, so when my father innocently inquired if he was going to retire, the brother responded puzzledly “Why would he retire? Sure, it’s worth 30 grand a year to him!”

Now, said brother may have been a little generous with his figures, but it’s not difficult to see how he could arrive in the ballpark. Free gear, gym memberships, team holidays, meals after training, nights away in hotels on training camps, potential car deals. The fact is if you are a high profile inter-county player with a successful county, you can do well out of the GAA. And if you are a smart county board, you will do as much as you can to ensure that your players are kept happy.

In a sense, it’s not the players fault that the GAA is becoming increasingly more professional. It’s the fans. 40 or 50 years ago it was ok to imagine that an inter-county player would only train twice or three times a week, eat steak and spuds every night after it, and have a fry on the morning of the game. But now, that idea seems repulsive. We have demanded that our players become fitter, faster, more “professional”. That’s because we are constantly seeing elite sport on our televisions, and want to retain the high moral ground that our beloved games still match up. We are increasingly demanding of our players to be more skilful and athletic, yet simultaneously, the idea of any player receiving compensation for doing so is repulsive to us. It’s a contradictory viewpoint, and it’s unsustainable.

Where the Brolly argument has some merit though is that these events shouldn’t necessarily be confined to a few particular individuals. So, if the likes of Colm Cooper or say, Stephen Cluxton in future, want a testimonial then that’s understandable, and in a way, commendable. But there are others, who are perhaps even more worthy of it who should not be forgotten.

What about the likes of Johnny Nevin from Carlow or Paul Barden from Longford? These are the guys who have done as much, if not more, than the Gooch to keep the show on the road in their respective counties, but just because they are not playing in Croke Park every September, are probably seen as inferior. These are the men the GAA must really incentivize to stay on. The Henry Shefflin’s and Colm Cooper’s of the GAA are blessed, not just in terms of ability, but in terms of geography. If Colm had been born in Clare, or Henry, Laois, would either be classified as the greatest of all time? We’ll always have Kerry’s and Dublin’s of this world. But if the GAA aren’t going to invest time and money into the Carlow’s, Leitrim’s and Longford’s, then it really is just a purely capitalist model.

In a sense, there is a grain of truth to both sides of the argument. In an ideal world everyone who ever played/managed a team would be purely doing so for a John Mullane-esque love of where they are from.  Then again, in an ideal world, Jeremy Corbyn would be in power in the UK and Communism would have worked. It’s easy to criticize the influence of money in the game and payments to outside managers, whilst forgetting that without guidance from other counties, the likes of Offaly would never have won a hurling All-Ireland.

So evidently there will be outrage any time an “amateur” player receives some sort of payment, but it would be perhaps even more of an outrage for a guy to give everything he has to a team, and not have anything to show for it at the end of it. So let’s congratulate Colm Cooper on his career.

Just don’t forget the little guys while we do so.