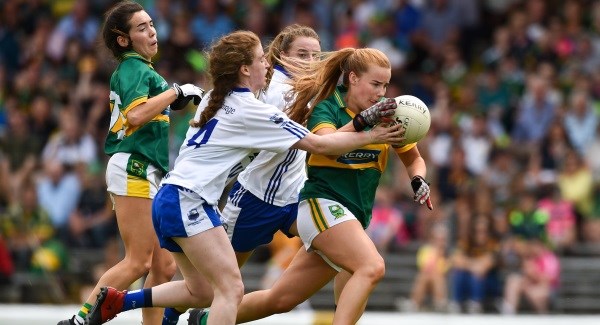 Former Donegal footballer Nadine Doherty thinks good semi-final wins will stand to both Kerry and Waterford in the Division 2 Final.

The Munster rivals meet on Sunday in Parnell Park. Speaking on this week’s Sportsgirls Podcast Nadine believes the wins over Armagh (Kerry) and Cavan (Waterford) will help both teams on Sunday: “That’ll definitely stand to both teams. Looking at Kerry they made the play-offs on score difference over Clare. So they just sneaked in there.”

Kerry started the league slowly but Nadine feels they really should not be in Division 2: “Both teams were slow burners in the group stages. I’d look at Kerry. They really are a Division 1 team. They went through a bad spell early in the league last year and that’s why they found themselves in Division 2.”

She feels the Kingdom are favourites, but only just, to gain promotion back to Division 1: “Their win against Armagh may have been a surprise to some people because Armagh, I suppose, had such a strong campaign. I would see them as slight favourites.”

Nadine praised the structures that Waterford have put in place and the work that they’ve been doing down there: “Waterford, fair play to them, they have been building as well the last couple of years. I believe they’ve overhauled all their structures down there. Ironic that it was Michelle Ryan who led the resurgence.”

She believes that Kerry’s experience could be the difference between the two sides on Sunday: “I think it will will be a brilliant match. I think Waterford will fight hard but I just think Kerry will just nick it. I think they’ve more quality and long term experience to get over the line.”

Brid Stack back in rebel camp a huge boost for Cork...