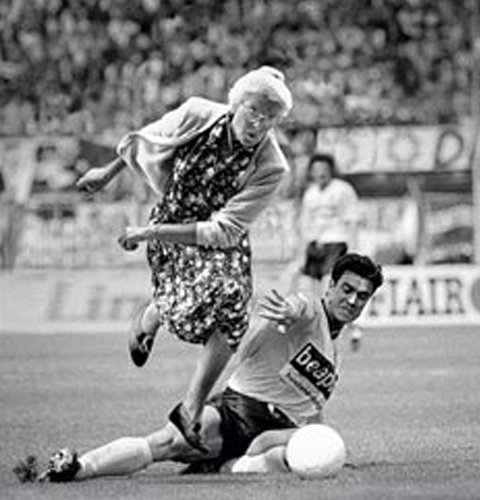 FIFA’s so-called ‘granny rule’ is often a contentious one in the world of football. Many feel that it is a positive rule and that players should be allowed to have a choice on what country they represent. Others meanwhile are of the opinion that it is something that is being exploited, a loophole that allows players who are not good enough to represent their own country to experience international football, often taking advantage of very tenuous links to their adopted country in order to do so. Whatever your opinion may be of this rule, what is clear is that no country makes the most of it quite like the Republic of Ireland. We have had countless players down through the years who have been allowed to represent the country because of this rule, including some of our most successful. In the 80’s and 90’s the likes of Tony Cascarino, Mark Lawrenson, Andy Townsend and John Aldridge were some of the country’s top players, and none of them were born on these shores. Examples amongst the current squad include players such as James McCarthy, Aiden McGeady, Ciaran Clark, Harry Arter and John Walters. It is certain that without the influx of talent from across the Irish Sea, we would not have experienced anything like the level of success we have been lucky enough in the last few decades.

With this in mind, the FAI are continually searching for players who may be eligible to pull on the green jersey. The players mentioned in this article may have previously played for Ireland at underage level before becoming non-committal on their international future, while others have had no previous links with the Irish set up. I have also not included players, such as Mark Noble and Curtis Davies, who have already declared their lack of interest in playing for Ireland despite their eligibility. Here are some of the players that have the choice to switch allegiances to the Republic of Ireland in the future:

Nathan Redmond, Southampton: Winger Nathan Redmond has been in sparkling form for the Saints so far this season, even being used as a striker at times.  He is still eligible to play for Ireland, and as recently as last year he stated that he was open to the possibility. However, there have been calls made recently for him to be included in the England squad. At 22 years old and with an illustrious England u21 career under his belt, it is likely that Redmond still harbours strong hopes of becoming part of their senior squad. In fact, it would be surprising if we did not see him as part of Gareth Southgate plans in the near future.

Jon Flanagan, Liverpool (on loan at Burnley): After bursting onto the scene during Liverpool’s title challenging season in 2013/2014, many expected fullback Flanagan to be a stalwart in the Liverpool side for many years to come. However, some nasty injuries stalled his progress and resulted in him being loaned to Burnley for the current season. Despite winning one cap for England in a friendly back in 2014, he is still eligible due to his Irish grandparents. Still only 23, he is a player that has been rumoured to have been of interest to Martin O’Neill in the not too distant past, and should he get over his injury problems and begin to reassert himself in the Premier League, O’Neill may want to revisit the possibility of converting him.

Conor Wickham, Crystal Palace: Palace striker Wickham is eligible to play for both Northern Ireland and the Republic through his grandfather. Once seen as one the brightest prospects in English football, his career has stagnated at both Sunderland and Palace, despite some flashes of potential. Wickham has represented the England u21’s on 17 occasions, but a call up to the senior squad seems unlikely any time in the near future. At 23, he may well consider his options at international level very soon. Having worked with Roy Keane in the past at Ipswich (where Keane compared him to Wayne Rooney) and with Martin O’Neill at Sunderland, as well accounting for Ireland’s lack of options up front , he is someone who the FAI may want to keep tabs on.

Patrick Bamford, Chelsea (on loan at Burnley): Bamford, who qualifies via his Irish born grandmother, has been capped once by Ireland before at u18 level, before switching allegiances to England. Bamford seemed to be one of the games rising stars not so long ago, being named Championship player of the year in 2015 after a 17 goal season while on loan at Middlesbrough. However, disastrous loan spells at both Crystal Palace and Norwich followed last season, while he has only made four appearances thus far in this term for Burnley. With his chances of a call up to the England squad diminishing at the same rate as his form has in the last year or so, Bamford may once again consider his international future. Similar to the case with Wickham, all options up front must be considered by O’Neill and Bamford may well prove to be an achievable target

Callum Wilson, Bournemouth: Should Ireland be able to persuade Callum Wilson to commit to the Irish cause, it would be a huge boost for the side. Wilson has proven himself to an effective striker at Premier League level, having notched 9 goals in 26 games. This was despite an injury ravaged first season in the top flight, where a knee injury limited him to 13 appearances. Wilson possesses devastating pace and an ability to finish in front of goal, something that is lacking in the current Ireland squad. Still only 24, he may still have a chance of representing England in the future. However, in my opinion Martin O’Neill must do everything in his power to get him to pull on the green jersey.

Scott Hogan, Brentford: Hogan has been strongly linked with a switch to the Republic of Ireland in recent months. Having recovered from a knee injury which saw him feature only eight times in his first two season at Brentford, he has been in devastating form since his return. Since the tail-end of last season, he has scored 18 goals in 25 appearances, and is considered probably the most deadly striker in the Championship on current form. Hogan’s Brentford teammate and Ireland international Alan Judge believes we will see him in a green jersey sooner rather than later, saying “I think he will come and play for us, he’s not stalling for a better offer, he has the right to take his time after two years of hell with injury”. It seems that Hogan is simply trying to get a run of games under his belt before embarking on his international career, something which is completely understandable after the issues he has been through. Out of all the players mentioned in this article, it is Hogan who we are most likely to see representing Ireland in the near future.