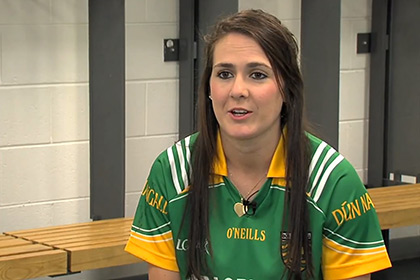 Donegal’s Katy Herron is proof that you can be a mother, work and play at the highest level with your county.

Herron was guest on this week’s Sportsgirls Podcast and spoke about how she juggles being mother to Joshua, her job as a teacher and playing in Division 1 with Donegal.

She admitted having a good support network makes it possible: “I suppose I get on with it. I’ve great support from my family; my mom is like Joshua’s second mom. Sometimes she takes over from me. It’s great to have that support. Without it I wouldn’t be playing at this level anymore. It’s something that I was really driving towards and I’ve great motivation for it and mom was support to me as was the rest of my family.”

Katy was honest about the struggles at times but it’s something she wouldn’t change at all: “It’s tough at times. There’s always times where you are just running around trying to get things done and you don’t get sitting down ‘til 9 or 10 o’clock at night and then you just want to go to bed. When you have such a passion for something you’ll make it work and I have that for football. It’s Joshua, my family and football, that’s what I have. I wouldn’t change it for the world.”

Joshua is no stranger to Donegal games and is certainly Katy’s number one fan. She gets him involved in her football which makes all the sacrifices worthwhile: “I know there’s days where you probably think you’ve too much on and Joshua probably suffers. More so than anybody else because I’m away training and stuff like that but when you have a family that supports you, he’s happy when he’s up here at mom’s. It makes it work. He comes to the games and he’s got a wee jersey with my number on the back. He gets involved too; it’s nice in that way. I want to make him proud.