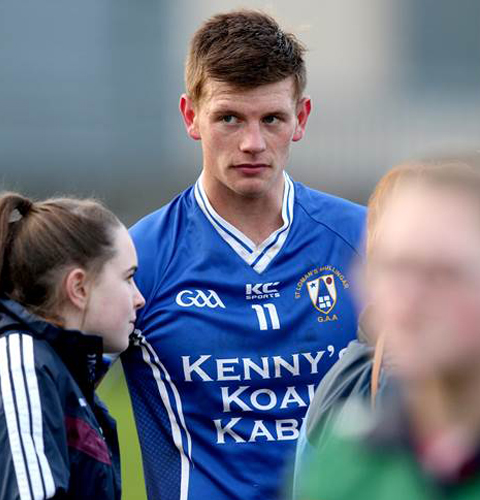 St. Loman’s Mullingar were deserving eight point winners over Tyrrellspass in Sunday’s Westmeath Senior Championship Football Final, defeating the tidy town on a scoreline of 3-13 to 0-14, to lift the Flanagan Cup for the third year in a row.

The Mullingar side had a dream start to the game after 15 seconds, when Westmeath star John Heslin caught the ball from the throw-in, made a surge towards goal and rifled the ball past Tyrrellspass goalkeeper Darren Quinn.

Heslin was absolutely brilliant from start to finish, scoring 2-6 with a truly fantastic performance and his goal inside the first minute, really was one of the greatest goals I’ve ever seen in my lifetime.

He’s up there with any player in Ireland and Colin Kelly will need to keep him both fit and happy if he is to have any chance of success with Westmeath.
Ken Casey and Shane Dempsey were both outstanding for Loman’s and Paddy Dowdall was magnificent at centre-back.

Luke Dempsey has now won county titles in each of the last five years, winning two on the trot with Moorefield between 2013-2014 and now having won three in a row with Loman’s.

Based on this year’s campaign and indeed every campaign since Dempsey took over, one would fancy them to win another couple on the bounce, as no team seems capable of beating them, with Mullingar Shamrocks the last team to beat them in a knockout game of football in 2014.

Shamrocks actually drew with Loman’s in the first round of the group stages though both sides had completely different campaigns afterwards, with Loman’s winning all of their group games by a landslide and Shamrocks failing to get out of the group, only winning one of their next four games.

Tyrrellspass will be devastated with the final, having had an extra man for nearly all of the second half, following Shane Flynn’s dismissal, but they failed to really make it count and when Ben Gavin was also dismissed after 54 minutes, one got the feeling that the game was over.

Two early goals from Heslin and Sean Flanagan gave Loman’s the dream start, but to their credit Tyrrellspass did battle back well, however there was only ever going to be one winner and that’s how it turned out.

Ger Egan kept his side in the game for large periods and Conor Slevin was outstanding at wing-back, up and down the pitch like a yo-yo throughout the game.
Alan Mangan has done a very good job with Tyrrellspass and is no doubt a very talented manager, but you do get the feeling he has gone as far as he can with this group of players.

He has been in two finals and a semi-final, but you would get the impression the cup will remain in Mullingar for a long period of time.
When you have a player like Heslin in the team and have players like Casey, Dempsey and Sharry to supplement him, you have the potential to dominate for a long time.
The next question is how will St. Loman’s do in the Leinster Club Championship.

However I cannot see them winning the Leinster Championship, as I believe St. Vincent’s will have far too much for Loman’s, should the Dublin Champions reach the final.

Overall though St. Loman’s will be thrilled to secure the three in a row in Westmeath and it would take a brave man to bet against them retaining their crown in 2018.