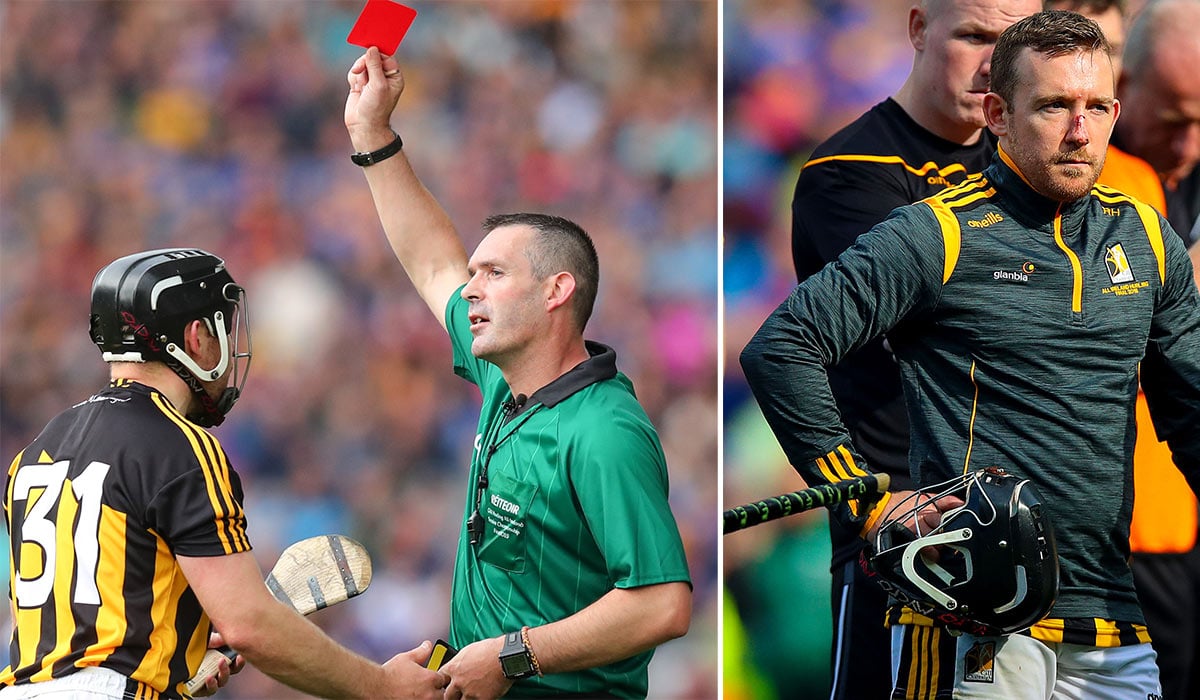 Ok, here’s a little game you can play in your own free time. It’s called spot the difference between these incidents

It’s the 20th minute of the Munster hurling final between Clare and Cork. The Clare defender Patrick O’Connor is stooping down to pick up a ball in the half back line when, from nowhere, he is hit by an almighty elbow by Cork’s Patrick Horgan knocking the helmet off the Clareman’s head (see 33.13 below). The referee Fergal Horgan has a choice to make as O’Connor lies prostrate on the ground and by the letter of the law should send the Corkman off.

It’s the 32nd minute of the Leinster Round robin encounter between Kilkenny and Galway at Pearse Stadium. Walter Walsh wins the ball on the 45 yard line and lays it off to the onrushing Luke Scanlan. The lightning quick James Stephen’s forward bursts his way through the All-Ireland champions defence before, just as he approaches the 14 yard line, he is clotheslined by the Tribesman full back Daithi Burke(see 9.06 on the below video). By the letter of the law the Galway man should be sent off but what is referee Fergal Horgan (that name again) going to do?

It’s the 63rd minute of the Munster senior hurling final in the Gaelic Grounds between Limerick and Tipperary. The home side are running away with the game as their corner forward Peter Casey takes control of the ball on the 45 yard line, only to be brought to an unceremonious halt by an unmerciful elbow to the head by the Tipperary half back Ronan Maher. Considering the ferocity of the challenge by the defender, who jumped off the ground and straight into the face of the onrushing attacker in order to make it, it appears there is only one decision the referee Paud O’Dwyer from Carlow can make.

DECISION: No card given

It’s the 41st minute of the All-Ireland Quarter final between Kilkenny and Cork at Croke Park. Kilkenny forward Richie Hogan is bending down to pick up a ball around 60 yards from goal, where he is poleaxed to the face by Cork Midfielder Bill Cooper arriving at full speed to challenge. The Danesfort man jumps up immediately to avoid incriminating his opponent still further (an action he may regret now) and the referee arrives on the scene to greet a prostrate Cooper, who has been injured in the collision. By the letter of the law the Cork man should be sent off but what action will the referee James Owens take?

It’s the 38th minute of the All-Ireland hurling semi-final between Kilkenny and Limerick in Croke Park. Limerick’s Barry Nash receives the ball in midfield from his counterpart Will O’Donoghue and as he looks up to assess his options further forward, he is stopped in his tracks by an elbow to the neck from the Kilkenny midfielder Cillian Buckley. By the letter of the law the Kilkenny man should be sent off, but what action will referee Alan Kelly from Galway take?

It’s the 33rd minute of the All-Ireland senior hurling final between Kilkenny and Tipperary. Cathal Barrett obtains the ball just inside his own 45 line. He tries to evade the incoming Richie Hogan but the Kilkenny man, when attempting to tackle, clumsily follows through on the Tipperary defender, catching him with his elbow. By the letter of the law Hogan should be sent off but what decision will Wexford referee James Owens, who had given a yellow card for an almost identical incident a month earlier, make?

And that’s why helmets are mandatory , would of broken his jaw and nose #KKvTipp #AllIrelandFinal bye bye Richie hogan you fool #Kilkenny pic.twitter.com/Tl9xd7ZT3i

Decision: Well, we all know what happened……

6 incidents, all of a similar nature. The end result was 4 Yellow cards, one where no card was issued, and one where, finally, a red card was actually given. Now can you see why Kilkenny folk were so incensed last Sunday? Because it’s all well and good to say a head high challenge is deserving of a red card, but by the looks of it, the rule only began to be implemented a few days ago.

Now all of this is not meant to be a vindication of what Hogan did. At best, it was a clumsy challenge. At worst, it was plain dangerous. What it does demonstrate, however, is how unfortunate he was to be sent off. Because going by the rationale of previous incidents, such offenses are rarely, if ever, punished.

This doesn’t just apply to hurling either. In the first minute of the All-Ireland football final between Kerry and Cork in 2009 the Kingdom’s Tadhg Kennelly poleaxed the rebel’s Pearse O’Neill with an elbow, an act he later revealed was a pre-meditated ploy (see 1.14 on the below video). Again no action was taken.

Moving back to hurling it’s often common to see similar incidents as Sunday go reasonably unpunished. While not an elbow in the 2015 All-Ireland hurling final Galway’s Johnny Coen performed a WWE style manoeuvre on Kilkenny’s Colin Fennelly that was only penalized with a yellow card by referee James Owens. Considering his leniency for head high challenges on at least 2 previous occasions then, why did the Wexford man decide to impose the ultimate punishment last Sunday?

It’s such a la carte application of the rules that so enrages GAA fans. Why would Hogan receive a red card for his infraction on Sunday, when 7 players committing similar, or in some cases, worse offences, went practically unpunished? While one hates to admit to it, there may be a case that extra benefit is gained by a team if their player stays down for longer. If one witnesses’ Hogan’s reaction to the Cooper challenge in the All-Ireland quarter final this summer, he was up on his feet in a matter of seconds. In contrast, Barrett spent quite a bit more time on the ground after the incident on Sunday. Now he just may have been hurt more in the challenge, but it’s a lesson to players in future that there is no advantage to be gained in trying to brush off an injury as if nothing had happened. In hurling, as in life, it’s dubious if honesty is really the best policy.

In fairness to the GAA they can point to the fact that they issued a directive this year in order to crackdown on head high tackles https://www.irishtimes.com/sport/gaelic-games/gaa-referees-instructed-to-crack-down-on-head-high-tackles-1.3893431 The wording of the piece indicated that “According to the new guidelines, the sanctions relating to illegal charge/collision will be determined by the following criteria: if contact is made to opponent’s head; if opponent has no opportunity to protect himself; if contact/impact is excessive or causes injury; if the elbow/forearm/hurley is part of the contact; if the player making contact jumps or has two feet off the ground; if the player making contact had a realistic alternative by way of challenging opponent; the direction and distance covered by the player who makes contact”

That all seems great in theory, but as regards “if opponent has no opportunity to protect himself” why then did Matthew O’Hanlon receive just a second yellow card against Kilkenny this summer for a full on frontal charge against Enda Morrissey, when by the wording of the law this should surely have been a straight red? Why were there 3 other incidents this summer, as egregious, if not more so, than Hogan’s that went unpunished? If there was one man who could feel some empathy for Hogan this week it’s probably Galway’s John Hanbury. He was the only other player this summer to receive a straight red card for a head high challenge against Ger Aylward in the Leinster Round Robin. For the rest of the games, the ruling seemed to be almost studiously ignored.

It’s not just as regards head high challenges that there are glaring variations in refereeing behaviour. There are similarly inconsistent applications of rules regarding striking of opponents. Look at the All-Ireland quarter final between Tipperary and Laois where Aaron Dunphy was punished for striking Paudie Maher. That may have seemed like a fair decision at the time, but considering John McGrath received only a second yellow card for his strike in the semi-final against Wexford, it seemed unnecessarily harsh. That semi-final also saw Cathal Barrett strike out across Lee Chin for which he received only a yellow card, and Barry Heffernan not receive any penalty for a punch to the stomach of Diarmuid O’Keeffe. Now that game was a very difficult one to police, and Sean Cleere certainly had his fill of it in the second half, but by the letter of the law there should have been at least 3 red cards in the game, when in the end, there was only one second yellow given.

Hurling is a fluid, physical, often times, frankly wild game. Usually, as can be seen above, there seems to be an unspoken rule you can almost get away with anything. Therefore when someone does get sent off, it’s nearly an affront to our sensibilities. Why are there these sporadic attempts to restore order to the game when, for the majority of the time, it appears completely anarchic? As the great Tommy Walsh, a man who was often fortunate to avoid a dismissal himself (just ask Brian Gavin), once said, “if I was a ref there’d be no red cards”. Obviously, it’s a statement that’s ridiculous, and yet there’s  some perverse logic in it. Either apply the rules correctly and consistently as you possibly can, in which case there will be a vastly increased number of red cards, or  don’t apply them at all.

So by the letter of the law Hogan was rightly sanctioned last Sunday. And of course, any dangerous head high challenges should be banished from the game. But the first time a tackle like that goes unpunished next year, as history shows us it is bound to do, just look out. Because the howls of outrage that will come, will be heard all the way from Kilkenny.