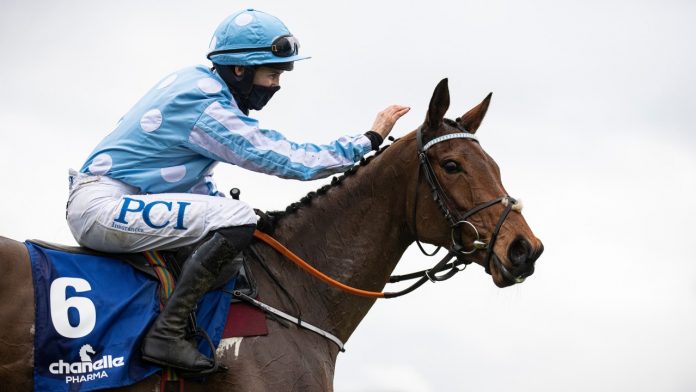 Honeysuckle is set to stay in training for next season, her final campaign. She would join an elite group if she were to win a third Champion Hurdle next March at Cheltenham. She is already priced up at 7 to 2. Constitution Hill who won the Supreme Novices’ Hurdle last week, is the 2 to 1 favourite to end Honeysuckle’s reign.
Trainer Henry de Bromhead said: “To get any horse to the races fit and well 15 times and never be beaten is a mind-blowing achievement. And with a mare it’s that much more difficult. The whole thing is remarkable.
“We’ve spoken about it in the last few days and I think the plan is for her to have one more season. Hopefully she’ll get the chance to return to Cheltenham again for the Champion Hurdle.”
The trainer spoke highly about Honeysuckle: “Whatever about sheer ability, which she has, she is a freak in my opinion. But also in terms of soundness; she turns up every time we want her. There are a lot of things that make a great horse, and I’m amazed some people even question her ability.
“Talking about times, Honeysuckle is better off a faster pace. They probably went too slow for her in the Champion Hurdle. If they’d gone quicker it would have suited her even more.”
“I’m not in any way knocking Constitution Hill, he was hugely impressive, but please respect our lady. What she has achieved is incredible. If you want to use the term ‘freak’ with Constitution Hill, that’s fine on what he did the other day – absolutely – but she’s the freak.”