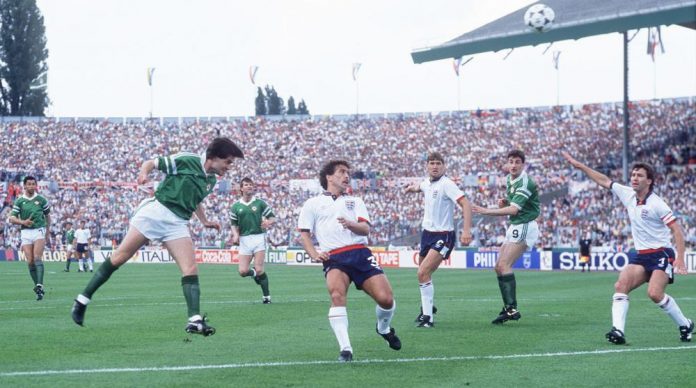 Former Republic of Ireland midfielder Ray Houghton admits his favourite goal for his country was the header against England in Stuttgart during Euro ‘88. It was the goal that prompted the Irish fans to sing “who put the ball in the English net.”

Speaking on Sports Talk with Deniese O’Flaherty Houghton said: “For me my favourite is always the England one. The Euros is nowhere near as big a tournament as the World Cup. The World Cup is the pinnacle. It is the biggest tournament you’ll ever play in. The World’s eyes are on you. It’s only when you go to the World Cup you realise how big it is.”

He went on to describe what it meant for him and the players to play in Euro ‘88. “To play in your first tournament; the country’s first ever tournament, playing against England and to score your first (it was my first International goal), for me that encapsulates everything.”

Speaking about his goal against Italy in the World Cup in 1994 he said. “The World Cup one was bigger, there is no doubt. It was on a massive stage.”

You can hear the full podcast on Spotify and Soundcloud