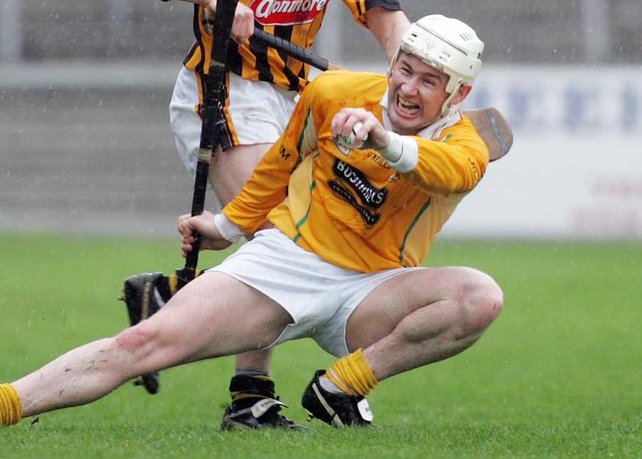 Antrim were convincing 13 point winners over their Northern rivals on Saturday last in Cushendall. Down started the game stronger registering the opening three points of the game, thanks to some nice frees from Scott Nicholson. Eoghan Campbell scored Antrim’s first score of the day after 7 minutes and soon later he forced a save from Stephen Keith in the Down goal.

However, just 6 minutes later, Keith was picking the sliothar from the back of the net, when Antrim goaled courtesy of a penalty from Ciaran Johnston. Johnston wasn’t done with his scoring though and on 23 minutes he fired another penalty past the Down number 1. Nicholson responded with a free for the Mourne men and they went in at the break trailing the Saffron’s 2-06 to 0-09.

Niall McKenna extended the advantage early in the second half with a point, while Ciaran Clarke was accurate from placed balls. After 65 minutes Antrim were in control 2-15 to 0-11. Clarke then got a goal of his own after a mistake from a short puck out and he fired home to book Antrim’s place in the semi-final.

The best players from Antrim were Ciaran Clarke, Ciaran Johnston and Niall McKenna, while for Down Scott Nicholson, Eoghan Sands and Derek McManus.

Player of Match: Ciaran Clarke – ended up with 1-07 in the end, the difference between the sides