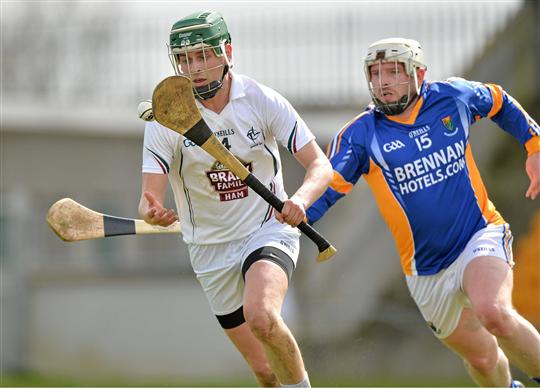 The battle of the close neighbours ended in a two point victory for the Garden County in St Conleth’s on Saturday last. Wicklow played with the wind in the opening half and they used it to their advantage with Christy Moorehouse and Daniel Staunton coming to the fore for Seamus Murphy’s side. Kildare were level with the Garden County on 27 minutes at 0-08 each when David Reidy knocked over his fifth free. Mark Delaney and Jack Sheridan had goal chances but they were well saved by St Patricks club man Eoghan O’Mahoney in the Wicklow goal. Andy O’Brien got a Wicklow goal before the break to leave them at the break 1-10 to 0-10 ahead.

The second half was much of the same with both sides going hell for leather. Bryan Byrne and David Reidy added scores early on in the second half and two Jack Sheridan points had the teams all square on 45 minutes. Padraig Doyle a second half substitute unleashed by manager Seamus Murphy got a Wicklow goal on 53 minutes, before Andy O’Brien extended the Wicklow lead to five points on 56 minutes. Former Kilkenny hurler John Mulhall scored a 57 minute goal for the Lilywhites to close the gap and a goal by Chris Bonus and a point from Richie Ryan meant that they now led the Garden County 2-18 to 3-12 after 62 minutes.

However, it was Christy Moorehouse who was the hero for Wicklow as his late points sent Wicklow into the semi-final stages, while Kildare will have to settle for a quarter final place.

Player of the Match: Andy O’Brien – hit 2-02 from play in a fine performance.