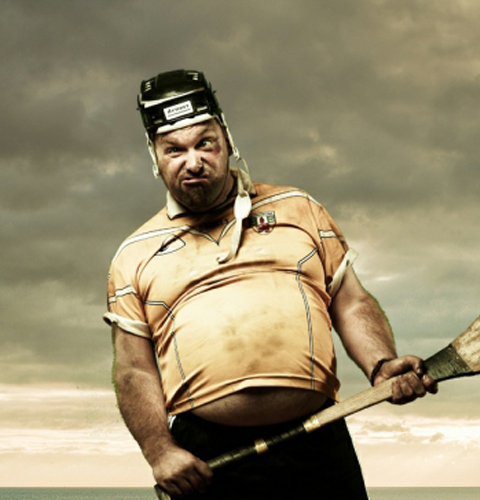 Do any of these guys sound familiar?

Great club servant, coming towards the end of his career but will not retire until the knee completely gives in. Dogged defender but in serious trouble when a fast nippy corner forward comes his way.  Likely to a few sneaky pulls to slow the young lads down.

Not much hurling ability but you live by the motto “you shall not pass”. First touch is not brilliant, but very good in the air. Likely to prefer a big awkward full forward instead of a fast one. Usually the one responsible for starting a big fight! This player can do no wrong. He is a club legend. He played County for 15 years and now he is back giving everything to the club. He leads by example with great catches and blocks. Nobody notices that his man has scored 5 points from play. If only all players were like this man – we would win the county every year.

There is usually one on every team. This guy only wants to hit ball – he couldn’t care less if his man takes him for 2-4.  Not great in the air and likely to be targeted by opposition keeper.  He will likely get dropped when the championship comes alive.

You can play in all 6 positions in the backs. You are assigned to mark the danger man of the other team. You are deemed the best player on the pitch once you keep him quiet – you don’t even have to hit a ball. You might spend the day moving from corner to corner or wing to wing. You will be trusted to put out any fires on the opposition team. This lad is usually to be avoided by forwards in training.

This guy will look for long clearances all the time for the roar of the crowd. He will catch the puck out and go for a score from 100 yards. He frustrates the life out of the full forward line as he hits wide after wide. He might score 1/10 shots and he will celebrate as if it was his first shot at the target. The simple pass is never an option with this guy around.

This player will fist pump at every opportunity. Every time he wins a free he will try and get the crowd going. He will run over to a team mate who has won a free and give him a slap across the arse. His team win a side-line – he is giving fist pumps to the crowd. This guy just will not stop fouling. He will walk off the field and say his man didn’t score – yet he gave away 6 frees. He will be sent off a few times a year and is hard done by each time. The stats man is telling the coach to take him off as he has racked up so many frees!

This lad is only on the team for his physique. He will cream anyone who comes near him. Loves the wet ground, will love a physical challenge. Probably likely to pick up a few cards from the ref but he is feared by all teams. This guy does not have much hurling ability but he will never let you down. The auld lads in the crowd love this guy. Although he could injure a few key players in the build up to a match. If you are marking this lad before a championship game – you are not in management plans!

This guy is one of the best young players on the team – more than likely a county minor. He only trains a few times a year with the club but he is very talented. He is good in the air, can tackle and a good striker of the ball. He knows he is good and he isn’t afraid to let people know how good he is. He will wear the county gear at every training. You might hear him say – Do you know I play County Minor?

Watch out for the forwards next week!