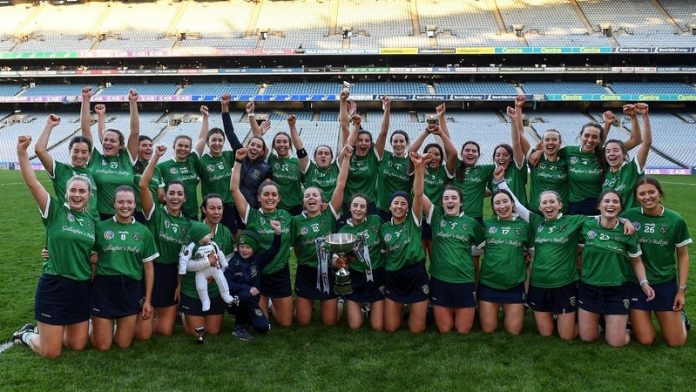 After collecting the Bill and Agnes Carroll Cup, skipper Niamh McGrath referenced the maelstrom of emotions the Sarsfields players had experienced in the past ten weeks.

From losing their AIB All-Ireland Senior Club Camogie Championship to Oulart-The Ballagh and then come through a titanic extra-time battle with old rivals Slaughtneil in the following season’s semi-final in the midst of a storm, they were back getting one over on OTB at Croke Park to reassert themselves as the premier club side in the land by a 3-12 to 4-5 scoreline.

Reflecting on it on the pitch afterwards, it was the harsh lessons they had been taught by Oulart-The Ballagh that were at the forefront of her mind, however. And it was evident from the opening exchanges, that everyone had taken them on board.

“We really were shown up big time in December,” said McGrath in a bracingly honest assessment of that game. “They absolutely hurled us off the pitch. We really put our shoulder to the wheel after that. I don’t think we’ve ever trained at such an intensity. We just put our standards up so much. They made us look at ourselves, so it’s great and the inside forward line were fantastic that way, tackling like dogs.”

McGrath shared the occasion with her three sisters Orlaith, Clodagh and Siobhan. The latter is one of the real leaders of this team, despite being the youngest of the quartet, supplementing a scoring return of 1-7 with phenomenal industry, forcing a slew of turnovers and covering most blades of the pitch.

“It was workrate that won it for us,” insisted Siobhán. “We didn’t match their workrate last December and we had to do that today. A good start is something we really targeted coming into it. Oulart-The Ballagh, every single game they’ve played, they’ve got unbelievable starts. We knew if we were to have any chance today, we couldn’t let them get a good start. We needed to get the good start ourselves.”

Siobhán may be short in stature but she is a real powerhouse. Always a threat with the ball, she was a nuisance without on this day, turning over Aideen Brennan three times inside a minute and leaving the full-back crumpled over after a particularly heavy tackle in those opening, frantic exchanges. This was a different Sarsfields.

The nominal full-forward had a goal in the third minute, into the same Davin Stand end she scored the crucial major to give Galway their All-Ireland last September.

“There must be a magnet down there or something ‘cos I don’t score many goals the other side! I found myself in a bit of space and when you’re one-on-one there, you have to make sure in games like this.”

Every time Sarsfields looked like pulling away, Oulart-The Ballagh hit back, Shelly Kehoe goaling in the 15th minute and then Úna Leacy grabbing her first after Tara and Cora Kenny had netted. That left it 3-6 to 2-4 at half-time.

But Siobhán McGrath just turned the screw with some sensational points from play and frees in the second half, while all around her, women in green stood tall, not least the likes of Maria Cooney, Tara Kenny, Laura Ward, Sarah Spellman, Niamh McGrath and Orlaith McGrath.

And yet, Anais Curran and Leacy raised green flags to ensure some doubt right down to the wire. But a fourth title would not be theirs. Sarsfields deserved this, hard though Oulart-The Ballagh resisted.

“When you have Úna Leacy and Ursula Jacob there, they’re special players,” said Niamh McGrath. “They’ll get a goal out of nothing and anytime it went in, your heart would be in your mouth but credit to our backs in the second half. I thought Maria, Laura and Tara – every one of them were super.

“Well we’ve been in five finals and we’ve lost three so we said we can’t lose another one. That’s not a good return. One out of five. It’s a special bunch. We really have grown up together since U10. It’s unreal. We are such a small place so to do this is unbelievable. We’ve a big few weeks ahead now!”

It is fitting perhaps, that the last word should go to Siobhán.
“The feeling when the whistle went, if you could bottle it, you’d never have a bad day again.”