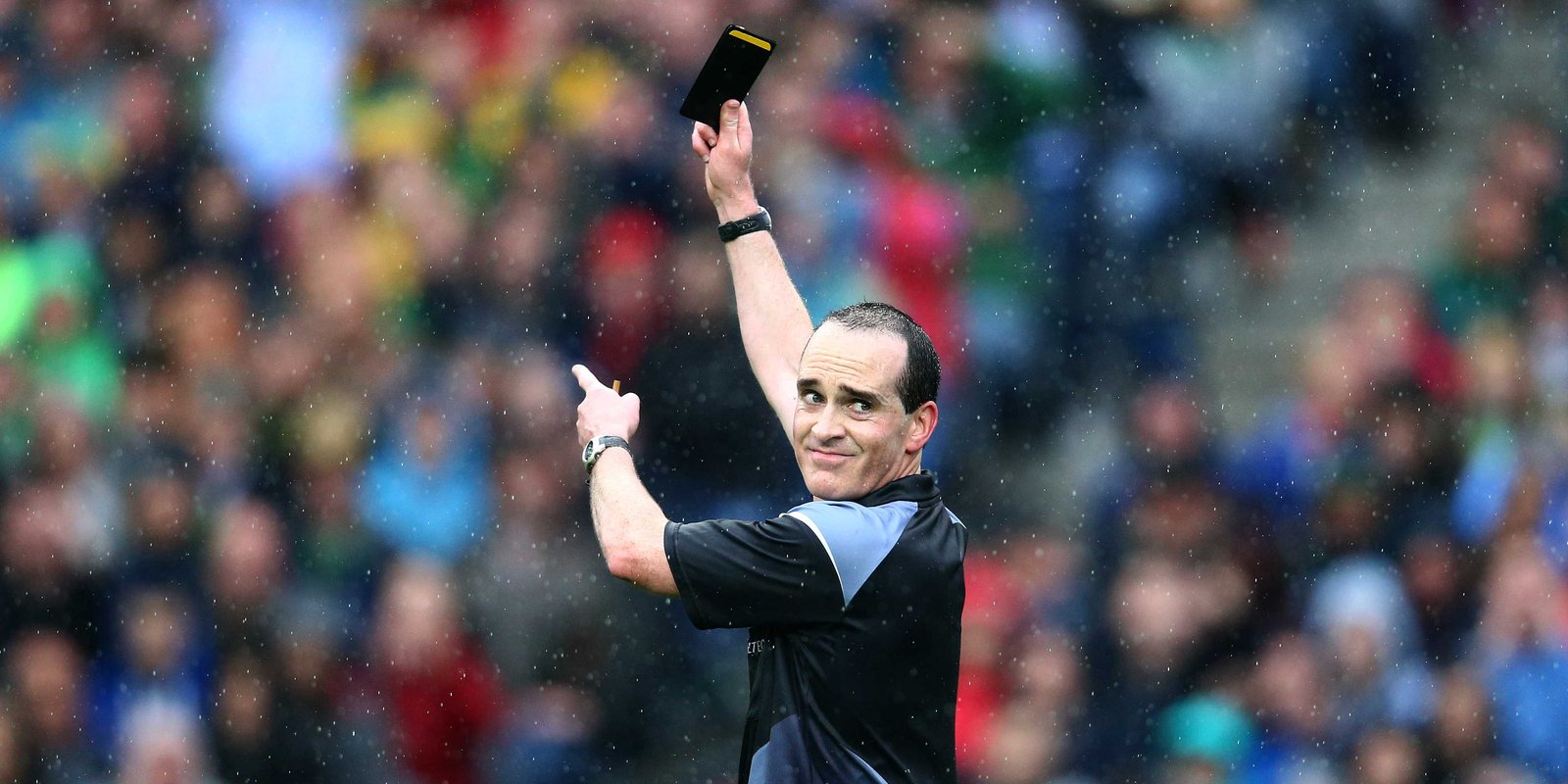 In the aftermath of the Dublin and Kerry encounter we witnessed recently, many immediately labelled it as one of the all-time classic championship battles. It was a game which had everything: two top class sides, end to end attacking football, mistakes, moments of sheer class, as well as some late drama. Meath referee David Gough was praised in many quarters, playing a big part in making the match such a spectacle, as he allowed the play to flow, attempting to avoid blowing his whistle for slight niggly infringements. However, not everyone shared this opinion.

After the final whistle, Gough had objects thrown at him by some Kerry supporters as he walked off the pitch. The main issue of contention was a shoulder by Kevin McManamon on Peter Crowley in injury time. It seemed a clear foul, and would have offered Kerry an opportunity to level the game via a Bryan Sheehan free. In that moment, Gough’s performance in the seventy minutes previous to this was disregarded. It was an ugly incident which marred an otherwise momentous occasion.

Unfortunately, scenes such as these are all too common in the GAA. Two of the most of the most famous examples include the Leinster football final in 2010, where Joe Sheridan’s fumble over the line handed Meath victory over Louth. There were also some unsavoury scenes after the All-Ireland semi -final replay between Kerry and Mayo in 2014, where after a furious Mayo fan had to be escorted off the pitch by a number of stewards as he attempted to confront the referee.

Why is it incidents such as these continue to be present in our sport? While nothing can condone such behaviour, it must be said that there does seem to be a huge problem with consistency with refereeing in Gaelic football. Very often what is considered a foul not only varies from referee to referee, but can even do so during the course of the same match.

It is hugely frustrating for both players and spectators alike. The addition of the black card has only added to this sense of frustration. It seems that many referees are reluctant to use the black card, as doing so often opens a Pandora’s box in that every foul in the game from then on will carry the expectation of a black card to accompany it. Calls of where’s your black card now ref?’ is one of the most prevalent reactions from amongst the crowd in matches throughout the length and breadth of the country. Many pundits have called for the black card to be removed from the sport, as it is doing more harm than good.

However is this really the case? One must not lose sight of why such a rule was introduced: to prevent the systematic fouling that was becoming a huge problem in Gaelic football. Prior to the black card, a defender could haul down an opposition player who was running straight through on goal and the act would essentially go unpunished. There has been a large reduction in the number of such incidents in recent years.

Nobody wants to see a resurgence of tackles such as Sean Cavanagh’s on Conor McManus in the All-Ireland quarter final in 2013, the tackle that fuelled Joe Brolly’s now infamous rant. At a time when the defensive structures and the lack of imagination and flair in Gaelic football are under such heavy scrutiny, we do not want to present a situation where the methodical pulling down of an opponent becomes common practice once again. This is why the black card must remain.

I believe that there are two reasons as to why the black card has become such an issue of contention. Firstly, many do not realise exactly what type of foul constitutes a black card. Secondly, there is also the issue I mentioned earlier in that the referees seem reluctant to issue them. A black card is issued for foul in which the tackler DELIBERATELY pulls down an opposition player. It is the ‘deliberate’ part that confuses many. It seems that the crowd calls for blood in any tackle in which a player is brought to ground. However, if the incident was merely a an accidental coming together, such as a tangle of legs or an unintentional trip, the awarding of the foul or even of a yellow card is punishment enough. Secondly, I have watched a number of games, most notably at club level, where referees seem to choose the ignore the rule.

I was recently at a club game in which there were five separate incidents of a player being deliberately pulled to the ground, not a single black card was distributed. This was not the only case such of this I have witnessed. Until referees correctly apply the rule, there will continue to be a sense of frustration towards it. Removing the black card would be a huge mistake in my opinion. What is instead required is the correct understanding and implementation of the rule on behalf of all parties: fans, players and referees alike.

Keane stars in Kilkenny win as Galway come up short