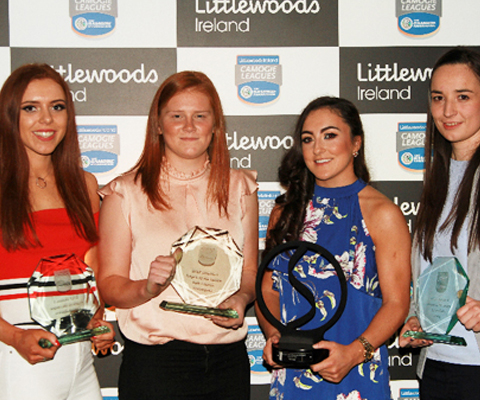 In our next interview we talk Waterford camogie with star forward Beth Carton. On Friday May 19th at a reception in Croke Park Waterford’s Beth Carton was awarded the Division 1 League Littlewoods Ireland Player of the League Awards. This was a deserving and noteworthy achievement by the young UL student from De La Salle who saw off stiff competition from Kilkenny’s Ann Dalton, Denise Gaule, Miriam Walsh and Limerick’s Niamh Mulcahy.

Beth’s fine displays and scoring exploits for Waterford caught the eye of her opposition managers to see her top the nominations list ahead of a very strong field. While delighted to have won the award especially with the ‘cailbre of players that were also nominated’, Waterford’s rising camogie star is quick to point out that ‘it’s a team sport at the end of the day and really I have all the Waterford girls to thank for me winning this award’.

After winning the Intermediate All-Ireland final in 2015 Waterford competed in the senior championship for the first time in 2016. The division 1 league was used as preparation for this year’s upcoming championship and despite being the underdogs in all their games Carton believes ‘progress was definitely made in this year’s league. We started our league campaign well and were unlucky to lose against Wexford by a point’. Beth caught the eye of all in attendance that day scoring 1-8 of her side’s total tally of 1-10. ‘We lacked a bit of consistency as we played well also against Kilkenny and Dublin but had a very poor game against Cork’. Once again it was Carton’s individual scoring feats and deadly accurate free-taking that had everyone talking. Losing to current All-Ireland champions Kilkenny by only 4 points was encouraging for the young Waterford side and with Carton scoring 13 points from 14 it was no surprise opposition managers were putting their best defenders on man marking duties and in some instances double marking her to curb her influence. In their only win in the league Waterford defeated Dublin 11 points to 7 and again Beth was the main scoring threat scoring 9 points.

Being her county team’s top scorer and free taker I ask Beth does she feel pressure to perform every time she plays? ‘I always feel a bit nervous before matches. But I also thrive on big matches and I like having a bit of nerves to focus me. Camogie is a team sport though and I know if I don’t perform there’s always another girl to step up, so I guess I never feel under too much pressure’. A great answer from the cool easy going 19 year old! With championship only around the corner Waterford find themselves in a tough group along with Galway, Kilkenny, Clare and Dublin. ‘Our first game is against Kilkenny on June 10th. It’s a tough opening game but this is what you train for, playing the All-Ireland champions. We have the heads down now and we are preparing to give it a right go against Kilkenny.’ With 3 teams qualifying from the group I ask Beth if she thinks it’s achievable for Waterford to qualify for the knockout stages? ‘It’s definitely achievable to finish in the top 3. There’s isn’t much between any of the teams this year and we wouldn’t be working so hard at the moment if we didn’t think it was achievable’.

Waterford camogie has made great strides in recent years accumulating in winning the division 2 league and Intermediate All-Ireland in 2015. The current team are a young team with a good core between 19-21, many are college students and some are sitting the leaving cert this year. Her performances in this year’s league and in winning the division 1 player of the league has really thrown Beth Carton’s name into the spotlight. But for those in Waterford following her playing career she has always been a serious talent and it’s no surprise she has had such an impact at senior intercounty level in the 2 years that she has been playing despite still only being a teenager.

In the 2015 All-Ireland final Beth lined out at wing forward scoring 1-2 (1-01 from frees). The fact that she is always so tightly marked by the best defenders in the country and that on many occasions the scores she gets from frees are also frees that she has won by her own attacking ability really shows what a fantastic talent she is.

Having just finished her first year of a PE and Geography degree Carton also added an Asbourne Cup winners medal to her growing list of achievements. Lining out at full-forward on the UL team college camogie gave her the opportunity to play alongside other inter county players. And if she could buy in a player to Waterford in a transfer market it’s her UL teammate and Tipperary midfielder Ereena Fryday that she would choose.

‘I played with Ereena this year in UL. She’s a brilliant player and a great leader’. I then ask Beth who was the toughest player she has ever marked?

‘It would have to be Cork’s Pamela Mackey. I have marked her a few times with Waterford and in college as she plays with UCC. She is a very tight and sticky defender and is always able to get out in front’. When it comes to her own county who would you rate as the best player you have played with? ‘It’s very hard to narrow it down to just one player. We have been very lucky in Waterford that there have been some great players in the last few years. Trisha Jackman, Niamh Rocket and Jennie Simpson are the 3 best that I have played with so far.’ Despite playing most of her camogie at full or corner forward for the Deise, Beth names centre forward as her favourite position. ‘I like centre forward as you are more involved in the play instead of being stuck inside at times’.

With camogie being such a huge part of her life since she first played with De La Salle when the club was established in 2008 I ask Beth that if she could wave a magic wand and change one thing about camogie what would it be? ‘It’s only a small thing but I think players should wear shorts instead of skorts.’ Speaking of her club De La Salle 2017 will see them compete in the senior championship this year having won the intermediate county final in 2016 only a year after winning the junior county final in 2015. A remarkable achievement for any club, I think it’s safe to assume that Waterford’s sharp shooter had a big part to play in her club’s success too!!

Waterford kicked off their 2017 championship at home to Kilkenny on last week, watch out for the name Beth Carton this season.