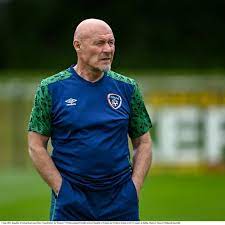 Two goals from Emma Doherty got the Republic of Ireland Women’s Under-19s off to a winning start in Round 2 of the UEFA WU19 European Championship Qualifiers as they beat Czech Republic 2-0 in Opava.
Dave Connell’s team set the tempo from early on with Erin McLaughlin wreaking havoc before Aoibheann Clancy and Becky Watkins showed off their incredible capabilities and footwork.
At the other end, Sabina Strizová forced goalkeeper Rugile Auskalnyte into a save on 27 minutes. But it was Ireland who looked more likely to score first with Doherty’s running dragging opposition defenders out of position and creating openings for her team-mates to run into.
Scoreless at the break, Connell’s team shifted up a gear in the second period and they got the goal that they deserved. On 48 minutes, Doherty raced onto a through ball from Kerryanne Brown, controlled the ball, kept her composure and finished well.
Kate Slevin’s ruthless and powerful defence impressed and was exceptional when paired with Therese Kinnevey. A fantastic collaborative play was made in the 77th minute but Watkins hit the crossbar with her attempt.
The next phase saw the Czech Republic have their most solid chance at goal but Auskalnyte would once again ensure the safety of her team’s clean sheet. A 79th minute substitution saw Maria Reynolds replace Watkins and Muireann Devanney came on for Clancy in the 90th minute.
There was still time for another goal as Doherty got her second with a looping header in added time when she met Jessie Stapleton’s free-kick.
Ireland will feel that they can still improve their performance but this was an impressive start with a clash against France on Saturday to come.

Aston Villa’s demise and can Steve Bruce save them?