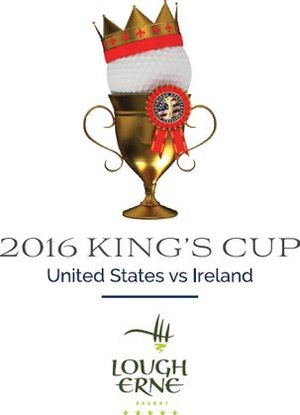 The inaugural International King’s Cup took place in Lough Erne Golf Resort, Enniskillen in April 2016. 16 Irish qualifiers did battle with their counterparts from the United States. The Irish win the competition in a one-hole play-off.
It was created by the United States Golf Challenge (USGC), which is “the largest and best two man best-ball competition in the US.”
Billed as the amateur Ryder Cup, the event is played in honour of golf’s greatest ambassador, Arnold Palmer.
The format of the event is unique as it is open to every holder of an official GUI handicap and there are four flights of handicaps so everyone can enter. There are also two age brackets from which two-man teams can qualify (age 18+ and Senior 50+) to try and secure a spot on the Irish team.
In 2015 the USGC conducted over 90 local qualifiers, 20 State Championships and had 100+ teams earn their way to the 2015 National Championship held at Disney World Golf.
Lynn McCool, Director of Golf & Head Professional captained the 2016 Irish Team to victory.