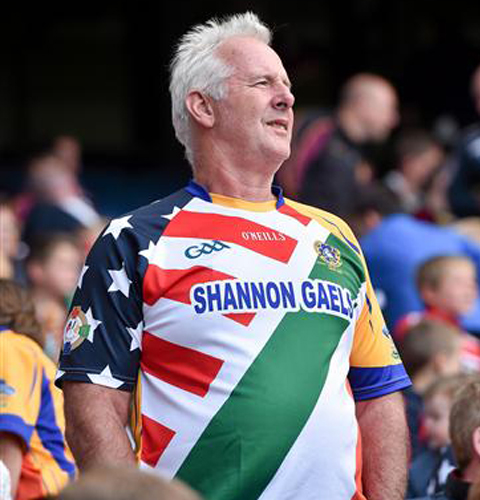 Well that was a relief wasn’t it? The first round of the Connacht championship took place on Sunday and, thankfully for the GAA at least, Sligo spared their blushes. It looked dodgy for a while. With twenty minutes to go Ross Wherity’s massive point gave hope that the Statesiders would pull off a shock, but a late rally by the Yeats men turned the tide, and saved us from embarrassment for another year.

That’s it though, isn’t it? Joel Slattery wrote an excellent piece on this website last week about how the GAA must have been hoping, from a logistical point of view at least, that Sligo won this match http://sportstalk.ie/massive-headache-gaa-new-york-win/. The idea of New York going through to the Connacht semi-final and then having to be accommodated through the All-Ireland qualifiers, must have given Aogán Ó Fearghaíl and co sleepless nights over the past few weeks, more so as for a long time it seemed possible it could happen. The question is though, why the organization allowed themselves to be put in this position in the first place? Because, if it’s not going to happen this year, then sooner or later, you can guarantee that New York will win a game in the Connacht Championship.

When is an All-Ireland not an All-Ireland? When the teams aren’t from there of course. Now, of course, all of the players that togged out for New York on Sunday are born and raised in this country. So they are Irish, but the very fact that they play their games in The Bronx, shows you all is not what it seems. Then again, since London also play in the championship each year, we are aware that our national competition is actually an international one. In fact, London have already won an “All-Ireland” championship when they garnered the hurling title in 1901.

There has always been a strong GAA community in New York. However, while the GAA have always had an eye towards the Big Apple, famously staging the 1947 All-Ireland football final in the Polo grounds there, there had been a reluctance to fully engage the city in competition. That changed in 1999 when New York were invited to compete in the Connacht Championship.

Now obviously, there may be some doubt about the legality of the Irish infiltration of the country. Considering the way Trump has changed the political landscape stateside in the last year, thank god the immigration office didn’t visit Gaelic park on Sunday, as they probably would have picked up a load of illegal aliens on the spot! All jokes aside though, it’s clear that New York are getting closer to winning a game by the year. Last year, they were only barely beaten by a complacent Roscommon side and they actually did win an Ulster hurling championship game in 2006. So when the Armageddon of New York beating a Sligo or Leitrim does occur, have the GAA a contingency plan for what their response is going to be?

The fact is 31 counties and two foreign cities compete in the provincial championships each year, but only 32 are allowed into the All-Ireland series. It’s convenient for the GAA that New York have continuously lost until now but what happens if/when that proves not to be the case?

It’s funny that a team from America caused all this consternation as, ideologically at least, the GAA and America are about as far away as you can get. Whereas America always imagines everything on a grand scale, the GAA thinks small. Over there, they call something the World Series when there’s only franchises from one country involved. Over here, we call it the “All-Ireland” when we’ve teams from London and New York.

But why stop there? I mean, it’s not as if London and New York are the only 2 cities around the world with a healthy ex-patriate community. Australia and Canada have probably been the 2 biggest countries for Irish based emigration in the last 10 years. In the middle east Dubai is becoming an increasingly popular Irish destination and there are several other communities across the globe.

Now you may say that there is a very obvious reason as to why the GAA don’t want to fully engage in developing teams from around the world and that’s financial. I’m not sure how much it cost all the Sligo players and officials to fly/stay in New York last week, but I’m imagining it was in the 10’s if not 100’s of thousands. Of course the GAA are wary about having teams play from other countries but if New York and London can play then why not others?

Is it ridiculous, for example, for a team from Australia to participate in the All-Ireland championship? Well, perhaps, but I don’t see it being any more so than the GAA flying a team from here to play international rules games against the Aussies there, and we’ve been doing that since the 80’s. Dubai is as close to Ireland as New York and would probably cost less to travel to. So, the reason why New York can compete in the All-Ireland championships, and not teams from other countries, seems flimsy at best.

You may say that the idea of GAA teams coming from across the world to play in a championship is all pie in the sky, but the fact is, there is already a precedent. The GAA world games were held in UCD Belfield in August last year and were a success http://www.gaa.ie/news/gaelic-games-are-coming-home-2016/. But while the idea of the competition is a good one, and the games were enjoyable, it’s fair to say that they weren’t of the highest possible standard. Sure, the sight of Germany playing Argentina in Gaelic football has a certain novelty factor, but they’re not exactly going to trouble an inter-county team, are they? Bring in the likes of New York, London, Dubai and Sydney into the equation though, and the landscape and quality changes.

Why don’t the GAA look into the possibility of having an “All-Ireland” championship for teams outside the country? Perhaps you could stage the competition over a couple of weeks in Ireland and invite teams from around the globe to play. Alternatively, the foreign sides could host the tournament on an alternate basis. It could be staged in London one year, New York the next, then Sydney or Dubai.

Obviously, the immediate question that will be asked is how these games will be funded. Well, considering the packed house in Gaelic Park last weekend and the high quality on show, it seems obvious RTE missed a trick by not televising the game. So, if you had entertaining games from ex-patriate teams over the course of a few weekends on television, allied to a healthy stadium attendance, would that not cover the cost of staging them? Also, there is the fact that Etihad Airways sponsored the GAA world games, but they would surely be more interested in promoting a higher quality product.

Picture the scene. It’s September 2018, and for the first time in over a hundred years the All-Ireland finals aren’t taking place in September. While the club championships are taking place across the country, there is a gap in the market for inter-county, or should we say, inter-country action. Here is where the idea of the World “All-Ireland” championships come in.

Stage the games over a couple of weekends, or maybe a month, with the final taking place at the end of the month. The prize for the winners? Well, entry into the next year’s All-Ireland competition of course. Having just one foreign team reduces the number of sides to 32, and it gives whoever that is a second chance in the qualifiers. Now evidently, the likes of London and New York might complain that perhaps Sydney, Toronto or Dubai are edging them out from their position in the “All-Ireland” for the next year. But then again, they do only get one, or perhaps two championship games a year anyway. The idea of them having quality GAA action for 2 weeks, or a month each year, rather than just one game, should be enough to allay their fears for losing their guaranteed spot. And given their history, either London or New York would be strong favourites to win the competition anyway. But I can imagine other sides catching up in future.

Considering the global village we now live in, and Ireland’s healthy emigration levels, it’s not that much of a stretch to imagine teams travelling the world to play in Ireland or other countries. I can see a day in the near future where sides from across the globe are competing in the GAA championship. The only problem is, we just might have to stop calling it the All-Ireland from now on.