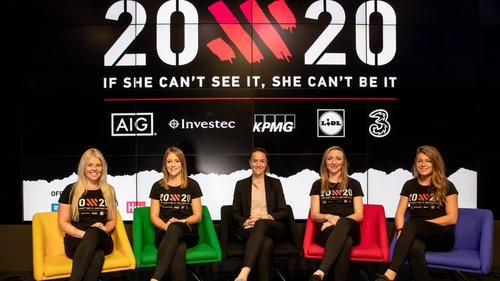 On this week’s Sportsgirls Podcast host Deniese O’Flaherty broached the subject of the lack of Camogie stars in the 20×20 campaign.

The whole aim of the campaign is to get 20% more coverage of women in sport, 20% more attendance and then 20% more participation.

Camogie pundit Lauren Guilfoyle mentioned the ‘show your stripes’ initiative that was held on International Women’s Day last Friday and the amount of Ladies Footballers that posted pictures on social media about it: “We definitely saw a lot of the ladies footballers coming out all guns blazing on Friday. I don’t know if that was a directive from the WGPA or was that from the Ladies Football Association or was it just the players themselves.”

Lauren did acknowledge the part players are playing  in the campaign: “We have seen the 20×20 initiative in motion the last couple of months and it really is being driven by the players themselves. We are starting to see a little bit more in terms of media coverage but I saw a tweet there the other day in one of the National newspapers; there was 99 people pictured (in the Irish times sports supplement last Saturday) and they were all male. We definitely have a little bit of a way to go.”

Delee, Woods and Aherne all tipped to scoop top awards.