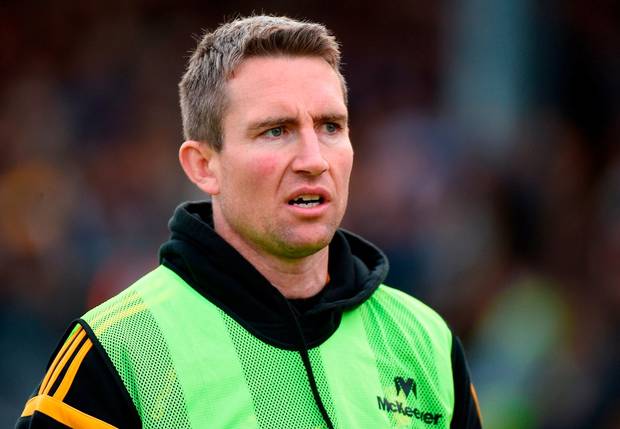 It’s moving season in the inter-county managers department. As the local club campaigns enter their last lap, the inter-county sides are getting ready to begin pre-season training for next year, and arranging their management team is a major part of that. Already, we’ve see Pàraic Fanning take over from Derek McGrath in Waterford, Liam Sheedy has returned for a second spell in charge of Tipperary, and the Dublin job, vacated by Pat Gilroy, is still up for grabs.
Moving down the ladders we can still see the managerial merry go round in full swing. Michael Ryan has stepped down from Westmeath after four years in charge, in order to hand the baton on to Joe Quaid, who has left Kildare in order to take up the role. His place in turn looks likely to be taken by recently departed Dublin Camogie boss David Herity. One of the most intriguing developments, however, comes in the form of Herity’s old Kilkenny team-mate Eddie Brennan, who has been entrusted with taking over the reins at neighbours Laois.
Now, in one sense at least, there’s no doubting Brennan’s pedigree. This is a man who was one of the greatest goal-scoring forwards in the game for a decade and he has been one of the most astute pundits, in his role on the Sunday game, since his retirement. It’s just that, in the limited time that Brennan has been the man in charge of an inter-county set up the results have been somewhat…mixed.

Brennan’s first year in the Kilkenny setup as under 21 manager, ended in ignominy as the county were defeated, for the first time in their history, by Westmeath. The following year went a bit better, as the county managed to win the Leinster championship and reach the All-Ireland final to an all-conquering Limerick side, who disposed of them rather comfortably.
Now as to how much can be read into those results is open for debate. The underage conveyor belt in the marble county is not what it once was. Anyone with a pair of functioning eyes can see that. But at the same time, there’s not exactly a groundswell of confidence in his record, to suggest he is the man to re-invigorate a struggling county.
Even if Brennan was to be the next incarnation of Brian Cody, the task ahead of him would not be an easy one. Make no mistake about it, being the Laois hurling manager is not an easy job. Now granted, there have been periods of (relative) success. During the 90’s the side were very competitive and nearly ousted Kilkenny from the championship on two occasions. Then a few years ago, Seamus “Cheddar” Plunkett had two spells as manager of the team and twice brought them to the brink of a historic scalp against Galway in the championship, as well as other creditable performances in the league.
Then again, those performances were a few years ago and things haven’t got much better since. In the intervening years since Plunkett’s departure Laois have exited the championship by margins of 35 (in 2016 against Clare) and 16 points (against a Dublin side, itself in freefall) in 2017. If we are to base the county’s standing on the basis of their performance this year, then, at fourth in the Joe McDonagh cup, they are ostensibly fourteenth in the hurling pyramid. It’s debatable if the county’s stock therefore, has ever been lower.
If Eddie wants an indication of how difficult the job is, he may be inclined to ask his fellow Kilkenny man, Brendan Fennelly, for advice. From one of the most famous hurling families in the country, the Ballyhale men took charge of the county for the 2011 championship, but it didn’t end well for him. In fact, after being knocked out of Leinster at home by Antrim, the O’Moore men faced Cork in the qualifiers and were summarily dismissed by 34 points which included the concession of ten goals. Not only did Fennelly not renew his time with the county after the year, but he hasn’t been seen in inter-county management since.
In the under 21 championship they have been defeated by Carlow and Westmeath in the past three years. At minor level they shipped a beating off Kilkenny by 30 points in 2017. So whichever way you look at it, the causes for optimism seem few and far between.
Comfort may be taken from the fact that the team managed to survive in Division 1B of the league last season, after a last gasp victory over Antrim in a relegation play off preserved their status. On the other hand, one could look at that as a drawback. Would you back the county to glean any points from their fixtures against Waterford, a newly re-energised Dublin, or All-Ireland finalists Galway? Even the two more “winnable” games, against Carlow and Offaly, are not necessarily walkovers, as the county have suffered defeats against both teams in recent years.

Aside from the problems related to the standard of play of the county, there is another, more sinister bugbear at the heart of Laois hurling, namely the violence that blights the game at club level. Last week images emerged of the county’s star forward, Ross King, being attacked by an opponent with the butt of a hurl in the county final between Rathdowney-Errill and Camross. The county captain lost teeth and missed the rest of the game which his side, Rathdowney Errill, subsequently went on to lose. While the Camross camp were insistent that the act was accidental, one wonders if it will have any bearing on the attitude of King and his club teammates, towards colleagues from the Camross club in the county setup in the coming year.
Now you could say inter-club rivalry is not necessarily a deterrent to inter-county success. Certainly, even during Tyrone’s football heyday of the 00’s, their club scene had a particularly fierce intensity to it. But there’s something about the disharmony of Laois club hurling environment, that has hindered their progress more than helped it. Speaking to ex-Laois great Niall Rigney earlier in the year, he told me how the infamous 1989 county final between his club,  Portlaoise and Camross, had a lingering effect on the county setup for years afterwards.
“We beat Camross that day, but to me it was the darkest day in my hurling career, because what happened on the field was terrible, it was disgraceful. There was a row in the game and to me it had no place in hurling. It had an awful knock on effect for about 5 or 6 years from about 89 where there was a lack of trust between people”.
We’ve seen before, noticeably with the notorious Galway senior hurling final of 2006, how bad blood from club games, can have a serious impact on the inter-county scene afterwards. It’s not easy, when you’re in a minority sport in a “weaker” county, to attain success. We are all fully cognizant of that fact and we don’t want to dismiss the good work of all the good Laois people involved in the scene at a local level. The only problem is, sometimes when it comes to county hurling matters, they don’t help themselves.
So that’s what lies ahead of Eddie Brennan. It certainly is not an easy job, and I don’t envy the task ahead of him. Will he be the man to change the fortunes of Laois hurling? Or will the comfort of the RTE studio be missed in the coming months? Only time will tell.