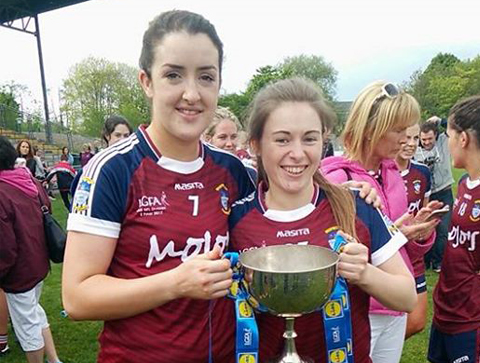 Sportstalk.ie caught up with Division 2 Team of the League wing back, Westmeath’s Laura Brennan recently to discuss her career, Division 2 League Success, championship and a little more…

How long have you being playing inter – county football and when did you make your debut?

I was first called to the panel under manager Peter Leahy in 2011, I was 20 at this stage and delighted as I had never been on any of the underage panels. I first played in the early stages of the Div 4 league but was in and out of the starting team for a long time! How much have the demands of playing inter-county football changed since you first started?

Seeing as Westmeath have progressed from Div 4, Intermediate football to Div 1 and Senior competitions, the rise in standard of competition as well as the improvement in standard of the overall game have meant big changes for any players out there. We are expected and required to be disciplined in nutrition, training and conditioning pretty much 12 months of the year. Gym sessions, pitch sessions, fitness training and correct hydration and nutrition are what we live. This rise in standard is fantastic though as it is parallel to more coverage in the media for Ladies Football and a greater following of our fixtures and results.

In this day and age, most people would say you’re mad for giving up so much of your time for inter-county football, what would your normal response be to them?

“What else would I be doing?!” Honestly though it can be hard to juggle work life, enough sleep and manage to see family and friends while training 5 times a week and sometimes I give out about it but I genuinely couldn’t imagine myself not doing it, I would have an awful lot of free time if I didn’t to try and fill and boredom would come quick. Plus, over the years family and friends have gotten used to me!

What drives you to get up and return to Inter-county football each year?

I couldn’t even imagine what else I would do with my time. It’s a lifestyle I love and so far in my short career it has never even entered my head not to go back, it’s still a given for me that as long as I still can and am given the opportunity to be on the panel, who am I to step down?!

A replay win against Cavan finally got you over the line and promoted to Division 1 Football after so many disappointments, did you always believe you could do it?

I did and I know the panel did too. We always say no one believes in us and our abilities more than we do ourselves. We are a very close knit team and really genuinely believe we can achieve (more) great things and are good enough to play Division 1 football. How important is it that you are competing in Division 1 next season?

It is huge for us, we are playing Senior Championship since promotion in 2011 and have had a few nice wins against senior teams and a few narrow loses. Playing Division 1 and against the best of the best early next year will develop and season us nicely and hopefully drive us on to be even more competitive in the Senior Championship.

What was it like winning Division 2 with that fantastic group of girls, did you guys get to celebrate?

Oh we did! We had a great couple of days celebrating, it was a long time coming for us so we were relieved to finally get across the line. Mojos niteclub in Mullingar are our sponsors so it’s always a great night after big games in there and we had a great day in Dons Bar, Moate continuing the celebrations the next day! Once Tuesday came it was back to recovery and preparation though as there wasn’t much of a gap before Leinster Championship started.

Team of the League Your performances in defence have earned you a spot on the Division 2 League Team, how happy are you about that?

It was great to get in my position, there are plenty of fantastic wing backs in the division so it’s an honour to get the spot on Team of the League. Maud Annie Foley got a midfield position and Rachael Dillion got corner back as well so we were well represented. Maud has been a stalwart on the team for years and is consistently excellent but I was especially delighted for Rachael this year, she is only 18 and this is her first year playing senior and she has been outstanding all year for us so far, watch this space for a future hero of the game!

You contribution was not only in defence you were quite active on the score sheet throughout the league especially in the replay final with your first half goal, is that something you have been working on to improve your game.

It has and something I want to keep progressing. The way the game has evolved there is no clear cut roles or positions any more. You have corner forwards who have to track back and defend as well as defenders that have to cover the pitch and contribute to attacking play. I’ve played in a few different positions over the years but half back is definitely my preferred so I have to try and make it my own.

Attention we are sure has already turned to championship now and Dublin are the current super power in Leinster, do you feel you guys are now in a position to really challenge for the title?

As I mentioned, no one has more belief in us and our abilities as a team than we do ourselves and we really do belief we could be among the best, the Dublin’s the Cork’s of the country. We have a great platform to work off now after winning Div 2 and if we build on the performance against Cavan in the replay and improve on that game by game, who knows what we might achieve!

Longford and Kildare are rapidly improving and Leinster is now becoming more competitive, do you see Leinster being a ultra competitive competition in the years to come?

It’s great to see the standard in counties always rising and the likes of Longford have made some great strides in the last couple of years, as have Kildare. Wexford are going great at the minute as well. The more teams competing at the top levels, the better and it’s only going to improve Leinster competitions and the standard of Ladies Football as a whole.

Lets get to know you a little more..eh!

What one Irish SportStar do you look up to and admire?

Brian O’Driscoll, he was always an amazing player and had great intelligence and vision on the pitch. He also seems like a bit of craic!

Where do you most like to go on Holidays?

I don’t generally like to go to the same place twice but also with all the training, don’t get to go away as much as I’d like! I’m definitely not the ‘lie on the beach all week’ type but as long as the company is good, and there’s plenty of things to do and explore, count me in!

What advice would you give young Ladies Footballers today?

Stick at it, enjoy the training and the friendships and work hard. I’m playing football since I was about 8 and had some great wins with school and club teams but didn’t make county panels until I was 20. You never know what you can achieve and at what stage so keep it up! Also there might sometimes seem like there’s more bad days than good but when you get that rare win over your rival team, when you get your starting place on your team or when you get to lift a cup, it’s all worth it, I promise!

What is your Occupation?

I’m a garda working in Dublin.

What is your Club?

Who is the toughest you have marked?

Yvonne McGonagle from Donegal, she has it all; height, speed, agility and skill. She’s a fantastic player.

Who is your favourite pundit?

I have to say Dessie Dolan, I don’t like pundits who use their fame and the media to put teams and individuals down, it’s an amateur game where people give up their time to do what they love. Dessie can read a game brilliantly gives great encouragement even when making some criticisms and never targets individual players. (It also helps that he is one of our own)

What annoys you most about Social Media?

Keyboard warriors, people typing comments and sharing stories and their views on things without knowing the whole story. You never know who you could be hurting with these online comments and there is far too many who type without thinking these days.

If you could play any other sport what would it be?

Probably hockey, I played with Athlone Hockey Club until I started playing with Westmeath and didn’t have time to play both then. I’d love to say camogie as it’s a brilliant sport also coming on leaps and bounds but I was always useless at it!

Who do you prefer Conor Sketches or Rory Stories?

It has to be Rory’s stories, he is just hilarious!