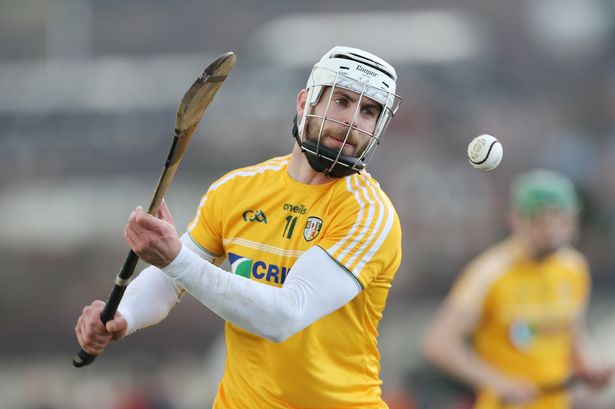 Antrim hurlers claimed back-to-back wins in the Joe McDonagh Cup, with a 2-16 to 0-19 victory against Carlow at Corrigan Park in Belfast.

Both sides failed to finish this game with 15 men, with Eoghan Campbell dismissed late in the first half for Antrim; and Jack Kavanagh, Diarmuid Byrne and seeing red for Carlow in separate incidents in the second half.

His ‘major’ helped the hosts to a 1-9 to 0-7 lead at the break, but Dominic McKinley’s charges were reduced to 14 men at this stage, following the dismissal of Eoghan Campbell.

Eillott’s goal came after just three minutes, in a game which saw Antrim get off to a blistering start.

Neil McManus (2) and Campbell were also on target, as Antrim led by 1-3 to 0-0 after just six minutes.

Antrim pushed 1-7 to 0-3 ahead after 22 minutes, but Carlow rallied before the break.

Carlow were aided by the wind on the restart, but soon found themselves reduced to 14 players, after Jack Kavanagh was shown a red card in the 45th minute.

Carlow twice cut the gap to three points in the third quarter, and indeed left two points between the teams in the 53rd minute.

Carlow found it tough as Antrim opened up a seven-point lead with Eddie McCloskey and Conor Johnston taking scores to ensure a 2-15 to 0-14 score-line on 71 minute.

11 minutes of injury-time followed as Carlow cut the gap to two points with five unanswered scores, but Antrim held out for victory.

Despite four minutes of he visitors cut the gap, but Antrim held out for a five-point win.
Cuirtear fáilte roimh chomhfhreagras i nGaeilge i gcónaí

Does 1B Wins Prove League’s Irrelevance?