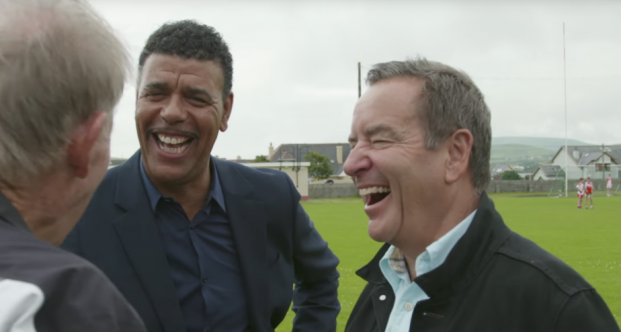 Legendary Sky Sports pundit Chris Kamara spoke of his love for the GAA on this week’s episode of Sports Talk.
Kamara and presenter Jeff Stelling were invited over in 2017 by AIB to make a series on the GAA, it culminated in the two commentating on the All-Ireland Final between Dublin and Mayo.
He said: “It was incredible. From the moment we stepped down in Kerry airport and got off the plane and met Micheál O’Muircheartaigh (he did have a problem pronouncing that) – I’m better at that now that I was before. It doesn’t sound like anything like his name. It was really good. We had the time of our lives.”
Kamara said he would love to come back over and cover the All-Ireland Hurling Final: “Everyone was saying that would be great if me and Jeff could follow up by doing that, and we would love to do it but the invitation never came. But that is a sport in itself.”

You can listen to the interview here