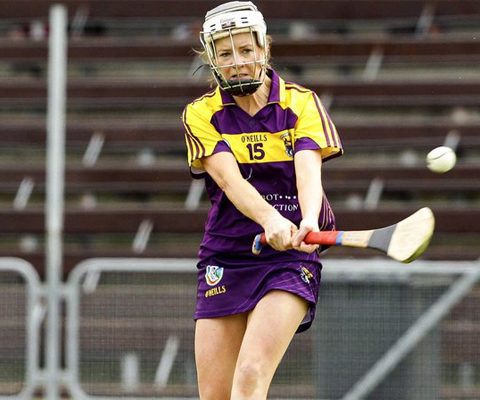 When I heard the news of Wexford Camogie great Kate Kelly retiring from inter-county camogie two memories immediately came into my head. The first was from back in 2002 when I was a fresh faced fresher in Waterford IT. I remember one of the earliest camogie training sessions on a dark evening and the manager at the time was putting us through our paces. Trying to get us fit we proceeded to do the dreaded 6-2-6 exercise, running 6 lengths of the field forward, then straight into 2 lengths of the field running backwards and finishing with 6 lengths forward as quickly as you could possibly go. I considered myself fit at the time and took off with the group of girls on the first of the 6 lengths.

Before long gaps began to emerge between the panel. I desperately tried to keep up with the leading pack eager to impress and make the Ashbourne Cup team. With still a half-length to go on our 6th length I looked over my shoulder to see Kate Kelly flying past me running backwards (quicker than I could run forwards) and looking totally at ease. By the time we reached the line she had her first length running backwards completed and was gliding through the second one without breaking a sweat. As the exercise went on she opened up a bigger lead and finished way ahead of the rest of us. I was immediately in awe of her tremendous level of fitness and her commitment and attitude to training.

The second memory was of the wonder point she scored in Wexford’s quarter-final win over Tipperary last year. Tipp had led for most of the game and at one stage had opened up an 8 point lead and looked to be heading towards an All-Ireland semi-final. But Wexford began a fight back and when the 5 minutes of injury time signalled was coming to an end it looked like the game was heading to extra time, but Kate Kelly had other ideas. In the dying moments of the game she travelled deep into her own half to force a turnover and win a line ball. Louise O’Leary cut a lovely sideline straight into Kate’s hand and despite being 45 metres out, close to the side line and the rushing onslaught of the Tipp defence she cooly slotted the ball over the crossbar to the delight of the Wexford followers.

It was a dramatic end to a pulsating game of camogie. At the time sitting in the stand only metres from where Kate took her shot I thought to myself, no other player in the country would have scored that point. Reflecting on it again today and remembering the tightness of the angle and presence of the Tipperary players along with the pressure of the occasion I still have no hesitation in saying that Kate Kelly was the only camogie player in the country that could have scored it.

These are just two memories I have of the thousands of memories Kate has created with her superb talent. She will go down as one of the most skilful players that ever played camogie. Like the great Colm Cooper who also announced this retirement this year Kate was never a big strong physical player but depended solely on pure skill to win possession and score. Also like the Gooch she had brilliant footwork and was one of the best free takers in the game. She had a huge part in Wexford making the breakthrough and winning the All-Ireland in 2007 after a gap of 32 years. And who will ever forget the 3-in-a-row of All-Irelands that they won in 2010, 2011 and 2012!

In recent years she played most of her camogie in the forwards for Wexford but for a long time she was the engine of the team operating at midfield where her fitness along with her hurling really shone. In the 2012 All-Ireland final she operated at mid-field and afterwards was awarded player of the match. A fantastic leader and team player Kate also deservedly picked up countless individual awards including 9 All-Stars. She is a fantastic ambassador for Camogie and no doubt will continue to be. Coming from a mad camogie and GAA household Kate’s first love will always be her beloved St Ibar’s/Shelmaliers who she will continue to play with.

Speaking about her decision to hang up the boots one can tell it wasn’t an easy choice to make. ‘It was a tough decision, or course,’ she said. ‘You think you will go on forever. You don’t want it to end. I knew in my heart last year that could be it.’ At 37 years of age and an unbelievable 21 years of service to the purple and gold Kate is well deserving of her retirement and all the plaudits that greeted her announcement. She will be sorely missed by Wexford and by camogie followers around the country.

In the last few years when her speed had begun to decline and injuries had crept up Kate showed that her camogie brain and skill were still as sharp as ever.

She bows out after a glorious career and can be more than satisfied that she always gave her best and stood up and was counted when her county needed her most.

WEXFORD VICTORY MARKS THEM OUT AS REAL CONTENDERS