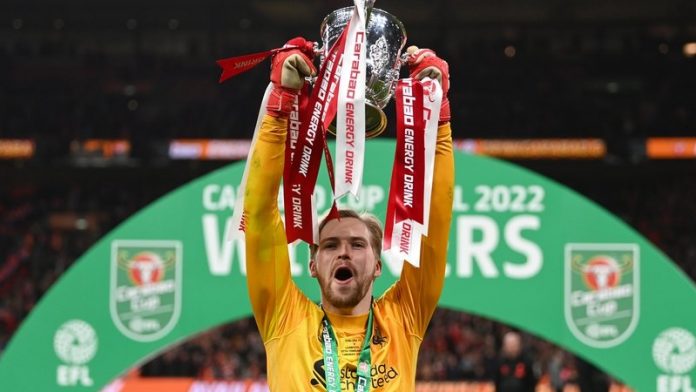 Republic of Ireland goalkeeper Caoimhin Kelleher was the penalty hero for Liverpool as they won the Carabao Cup for a record ninth time. The Corkman scored the decisive spot-kick in the sudden death penalty shoot-out. Chelsea keeper Kepa Arrizabalaga stepped up to take their 11th penalty but blasted the ball over the bar.
The quality of scoring in the shoot-out meant that it went down to the two keepers to decide the tie. Chelsea started Edouard Mendy in goals but manager Thomas Tuchel decided to bring on Arrizabalaga in the second half of extra-time as penalties loomed.
Although the game ended 0-0 there was plenty of drama throughout the 120 plus minutes with both sides having goals ruled out in normal time. Liverpool thought they’d taken the lead in the 67th minute but after consulting with VAR, referee Stuart Attwell disallowed the goal. Romelu Lukaku thought he’d won it for Chelsea but the goal was disallowed for offside.
The win was third time lucky for Jurgen Klopp who lost his last two appearances at Wembley. The last time Liverpool played in the League Cup Final at Wembley was 2016 where they lost on penalties to Manchester City.
Chelsea started well and Kelleher made an excellent save from Christian Pulisic. While down the other end Mo Salah scuffed his free-kick wide. As the half went on Liverpool upped their performance with Mendy denying Naby Keita and Sadio Mane.
Salah headed wide before Kelleher pulled off another fine save to deny Pulisic. Mason Mount then squandered a good goal chance. In the second half Mount also should’ve done better with his effort.
Liverpool opened the scoring in the 67th minute when Mane’s header was headed home by Matip. After consulting with VAR Attwell chalked off the goal due to Virgil Van Dijk adjudged to being offside.
At the end of normal time Kelleher saved from Lukaku. The Belgian had a goal ruled out for offside in the first half of extra-time. There was nothing else of note after that until the penalties where Corkman Kelleher became the Liverpool hero.

New incentives to qualify for a place on Team USA