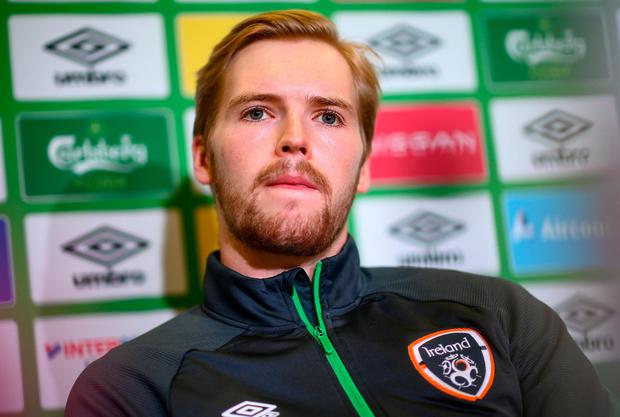 Republic of Ireland manager Stephen Kenny has admitted that Caoimhin Kelleher will start in Saturday’s International friendly with World number 1 Belgium at the Aviva Stadium. The Corkman is also expected to start against Lithuania on Tuesday.
Gavin Bazunu and Mark Travers both pulled out of the squad during the week, meaning it was most likely the Liverpool netminder would begin in goal for what is the FAI’s centenary game.
Kenny said the netminder deserves his chance. He said: “Deservedly so. Caoimhin will definitely start, that’s absolutely right, for sure. He’ll most likely play the two matches now, I think it’s fair to say.
“He’s had to be patient because of an unfortunate injury. He missed the last March camp with injury and Gavin Bazunu has come in and been absolutely outstanding, outstanding.
“He has all-round qualities, really. His composure under pressure and his general athleticism, his ability to male brilliant saves,” added Kenny, when asked to discuss Kelleher’s best traits.
“But obviously he’s been in a great environment at Liverpool for a few years now and training every day at a very high standard and playing in the games that he’s played in, so he’s got good experience.”
Ireland have not conceded a goal in four and a half games and their manager hopes that can continue. He said: “We’re on a run of four and a half games now consecutively without conceding a goal, and Caoimhin has played his part in that because he played against Qatar.
In Caoimhin’s two matches to date against Qatar and Hungary, he hasn’t conceded a goal either, so he deserves his chance because he’s been absolutely excellent.”
Former Shamrock Rovers keeper Bazunu has established himself as the Ireland number one but Kelleher now has a chance to show what he’s made of. Travers has been in excellent form for his club Bournemouth and Kenny is delighted with the competition for places. “Well we have competition for places, and that’s a good thing. You never know, in June or September who’s fit or who’s not fit or whatever issues there are, so it’s good to have that depth and that level of competition. I look on that as a positive thing.”